MOSCOW, December 14. On the “big” press conference of Russian President Vladimir Putin on December 17, 1390 accredited journalists, according to the Kremlin website.

The press service of the Kremlin yet does not name the venue of the meeting of the President with reporters. “Information about the venue and access to the event accredited journalists will be specified in the application e-mail address” – promises the Kremlin.

The live broadcast will lead the First channel, “Russia 1” “Russia 24” and Public television of Russia (OTR). 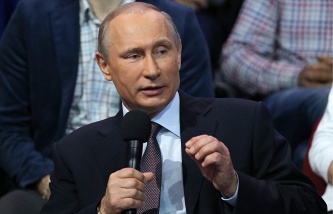 Putin believes that a free press helps to strengthen the country

This year the press conference of the head of state will be held for the eleventh time.

In a press-service of the First channel said that the TV channel will traditionally be shown live communication of the President with journalists of Federal and regional as well as foreign media. According to the broadcasting, press conference starts at 12:00 GMT.

In a press-service VGTRK also reported that the holding’s TV channels – “Russia 1” “Russia 24” also will do a live broadcast of the annual meeting of Putin with journalists.

Viewers will also be able to see communication of the President of the Russian Federation to journalists at the OTP. The broadcast will go with the sign language.

The first “big” press conference the President held in 2001 and since then he met with journalists every year. The break was made only for the period when Putin served as Prime Minister from may 2008 to may 2012. However, after the election of the President for six-year term in 2012, he resumed the practice of holding big press conferences.

The reason for the first meeting with the press in 2001 was the huge number of applications from journalists in an interview with the Russian leader. Then it was about 500 accredited journalists, and it lasted an hour and a half. Since then, the number of reporters who wish to directly ask the President a question, has tripled, while communication is also significantly increased.

In recent years, large-scale meeting of Putin with journalists held in December and actually sum up the year. The President does not restrict the press or on the topics of questions asked, no time to communicate, but priority is given to the Russian media, and regional.