MOSCOW, December 15. The Federal Antimonopoly service (FAS) proposes to discuss the possibility of establishing differentiated minimum retail price (MRP) for hard liquor with different alcohol content. The proposal contained in the draft report of the FAS on the suppression of regional protectionism, writing on Tuesday the newspaper “Vedomosti” and “Kommersant” with copies of the document. 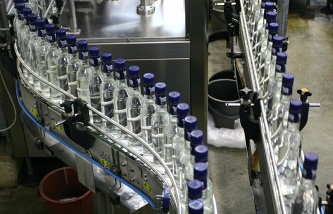 Head Rosalkogolregulirovanija has not excluded increase of minimum price for vodka

“According to some experts, it is advisable to discuss the possibility of separation of the regulation of alcohol (two categories) – fortress 34-38 degrees and 38-56 degrees”, – is told in the document. For first service offers dramatically lower the excise tax and set a minimum retail price of 150 rubles. (now 185 rubles per half liter of vodka), the second is to increase the price to 240 rubles., but to freeze the current rate of excise tax until 2018, it is specified there.

The idea of the FAS is to divide spirits into two major groups, and significantly raised in price, the difference was more obvious, says one of the authors of the report, the head of the control and financial management FAS Vladimir Michelosen. With this approach, according to him, availability of drinks will be increased with decreasing degrees: consumers will prefer a less strong drink, and hence following them will be reconstructed and manufacturers. Therefore, counterfeit alcohol, which is not paid the excise tax, will not be a competitive advantage over legitimate, write the authors of the document.

The proposals of the FAS for alcohol market regulation contained in the draft report “the elimination of regional protectionism”. Yesterday he was sent to Rosalkogolregulirovanie (PAP), the Ministry of industry and trade, Ministry of economic development and sectoral unions, said Michelove.

Representatives of the RDA and the Ministry of economic development stated that the letter from the FAS their agencies had not yet received. Further comment they refused. The representative of the Ministry of industry and trade has failed to promptly respond to the request. Yet even within the FAS consolidated opinion on the issue of differentiation MRC no, said Michelove, but the service is ready to discuss it.