The Finance Ministry believes that the implementation of the may decrees of the President costs about 700 billion rubles, and the subjects of the Russian Federation officially represented by the SP the information that this figure is significantly more, said the head of the Ministry Tatiana Golikova. She noted that in 2015, we have a 2.8 trillion rubles. 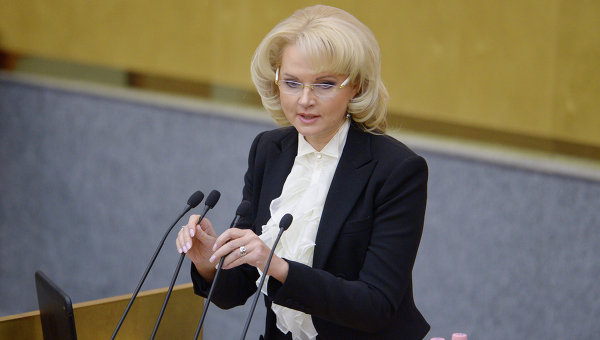 MOSCOW, Dec 15. Russian regions do not have funds for the implementation of the may decrees of the President, the head of the accounting chamber Tatyana Golikova.

“What are the decrees of the President from 2012? The Ministry of Finance said that they cost about 700 billion rubles, and the subjects of the Russian Federation officially inform us that this figure is much larger. For example, for 2015 to 2.8 trillion rubles”, — told reporters the head of the controlling Agency.

“May decrees” — wide development program of social guarantees, which Vladimir Putin stated in 2012, immediately after assuming the office of the President, fulfilling his campaign promises. A year after the signing of decrees, the government reported that it had met their just over two-thirds. In the draft Federal budget for 2016 on the implementation of these decrees provided 676,1 billion rubles to the budget of the current year for these purposes was laid 661,5 billion rubles.

This difference in estimates, according to Golikova, is one of the reasons for the growth in the debt burden of the regions. “We, unfortunately, are fixated on the fact that the structure of public debt of subjects of the Russian Federation significant volume is occupied by commercial loans. And became interested in the need to replace commercial loans budget. And actually the second year in a row — 2014 and 2015 are actively working in this direction”, — he said to journalists.

However, according to the head of audit chamber, it is necessary to find the reason why the regions have to attract a large amount of borrowed money. “Apparently the amount of expenditure authority, which is now assigned to them, partly is unaffordable” — said Golikova. Thus, according to her, no coordinating of work in this area at the Federal level, no. “And this is the position of the Ministry of Finance – that we should not interfere in the powers of subjects of the Russian Federation, including how they estimate the cost of the may decrees,” — said Golikova.

“To evaluate the feasibility of ordinances to those terms defined, it is necessary to understand, how much they cost and if they will have enough (region – ed.) money,” — said Golikova. However, she acknowledged that the may decrees of the President cannot be considered the only cause of imbalance of regional budgets. “The growth of public debt of the subjects begins with the moment when the decrees of the President acquired a normative force, and 2012, when presidential decrees have not yet started being implemented,” — said Golikova.