U.S. Secretary of state at the meeting with the Russian foreign Minister expressed hope that the meeting in Moscow will allow to achieve progress on many issues. After the welcome speech, John Kerry told Sergei Lavrov, a “thank you” in Russian. 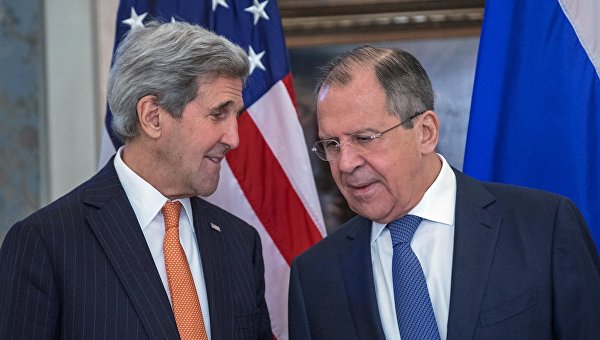 MOSCOW, Dec 15. About 150 journalists covered the meeting of Russian foreign Minister Sergei Lavrov and U.S. Secretary of state John Kerry, the correspondent. Such excitement for traditional bilateral contacts with the foreign Ministers of Russia and the USA and often ends in confrontations and arguments for a better position for shooting.

The talks in the mansion of the foreign Ministry started late in fifteen minutes. Lavrov and Kerry before sitting down to the negotiating table, shook hands on the background of the U.S. and Russian flags. And then separately the Russian Minister shook hands with Kerry’s Deputy, Victoria Nuland, the state Department responsible for the Eastern European direction and in particular for Ukraine.

Every gesture of the Ministers in the course of the Protocol was accompanied by numerous clicks of cameras, which carry at some point looked back and Lavrov momentarily interrupted his speech and then joked: “it is strange that in the age of new technologies still haven’t figured out a noisy instrument”.

U.S. Secretary of state looked a bit tired — he flew to Moscow in three hours the night after, as he put it, “constructive” talks with colleagues who were in Paris. Finishing the welcome speech, he thanked Lavrov for Russian, saying “thank you”. In this case, Kerry expressed hope that the meeting in Moscow will allow to achieve progress on many issues, including the Syrian issue. And this will open the opportunity to continue consultations, Group support Syria in new York.

Before the talks in the yard of the mansion of the foreign Ministry ran a three-colored cat. Russian superstition — that’s good luck, joked to Russian reporters.