MOSCOW, December 15. Prime Minister Dmitry Medvedev instructed the Ministry of economic development to develop standards for procurement of state companies. This was reported on the website of the government of the Russian Federation following the meeting the Prime Minister with activists of the Russian popular front on December 8. 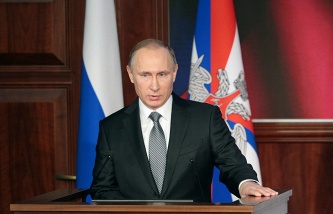 The Ministry of economic development should submit, by 15 February in kamben project relevant directives to representatives of interests of the Russian Federation in boards of Directors and Supervisory boards of state-owned companies” on the issue of rationing of procurement activities and develop related guidelines on the procurement of goods, works and services”. Medvedev also instructed several departments to work on the composition of the mandatory list of goods, works and services, which will apply certain requirements in the procurement, including the quality and ultimate price.

At the meeting on 8 December, commenting on the proposals of the popular front on limiting expensive purchases of state companies, Medvedev noted that such structures must themselves adopt internal rules. He suggested that in this regard, “to give binding instructions to state representatives in the Board of Directors (state-owned companies) to consider these issues at the meetings of the boards of Directors of each company, again, consistent with the level of domestic consumption, culture, and, of course, just with rationality, these internal documents were taken”. The Prime Minister then felt right and the idea of normalization, the maximum value of public procurement officials. “The purchase of expensive equipment, furniture or the like, is always visible and easy to identify. In this sense, the idea of rationing is absolutely correct,” – said Medvedev.

Following the meeting with activists of the popular front, the head of government also instructed several departments to work together with the Front to study the issues of maximizing the opportunities of a unified system for countering corruption in public procurement and ensure the smooth functioning of a single system.

Moreover, Medvedev instructed the ministries to submit, by 1 March 2016 to the government proposals for strengthening the duty of local authorities to use the standard project documentation in the construction of cultural and social facilities.