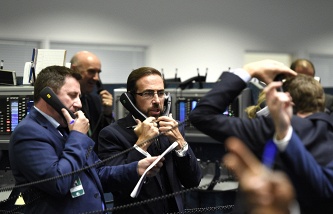 Belousov: fluctuations in oil prices below $40 per barrel can take a long time

“What goes on the market, hardly anyone can predict. Of course, we here should be guided at formation costs, investment programs, primarily on forecasts of the prices that are average. In our opinion, the average price of next year can reach the level of $50” – he said in an interview with TV channel “Russia 24”.

According to Novak, the oil market today could impact the devaluation of individual currencies. “The market is affected by those decisions which take place including the devaluation of individual currencies affecting the markets. Influenced by production volumes, which are now implementing the OPEC countries, which in 2015 increased its oil production by 1.5 million barrels per day,” added the Minister.

In his opinion, it will be due to the presence of large amounts of oil reserves and the release next year on the oil market of Iran with the volume of 1 – 1.5 million barrels per day.

Siluanov believes that low oil prices in next year will dominate and it is possible that during certain periods it will be $30 per barrel, maybe less. As the Minister said, Russia’s budget for 2016 was shaped based on oil prices at $50 a barrel. Today the average is about $37-38 per barrel.