MOSCOW, December 15. The President of Russia Vladimir Putin said that Moscow and Minsk are very close in settling the Ukrainian crisis and the fight against international terrorism.

“We noted the closeness of positions of our countries on such important topics as the settlement of the Ukrainian crisis and the fight against international terrorism in Syria,” – said the Russian head of state to journalists after talks with his Belarusian counterpart Alexander Lukashenko.

According to Putin, “in the international arena, Russia and Belarus conduct a coordinated foreign policy”.

“This year special attention was paid to conducting within the UN and other multilateral organizations of a complex of events dedicated to the 70th anniversary of Victory in the great Patriotic war, another example of the close co-operation was the acquisition in July, Belarus with our active assistance of the observer status in the Shanghai cooperation organization”, – stated the head of state.

“To strengthen regional stability and security have agreed to actively develop military – technical cooperation”, – said the President of the Russian Federation.

About the simplification of migration rules for citizens of Belarus

The presidents of Russia and Belarus also signed a joint Declaration following talks in Moscow.

The document includes paragraphs about the equal rights of citizens to freedom of movement, choice of place of stay or residence on the territories of the States-participants of the Union state from January 24, 2006.

Putin believes that the simplification of migration rules of the Russian Federation for citizens of Belarus is in the nature of partnership between the two countries.

At a press conference after talks with his Belarusian counterpart the Russian head of state noted “an important initiative in the sphere of migration”.

From 1 January of the current year foreign nationals wishing to live and work in Russia must prove knowledge of Russian language, knowledge of Russian history and fundamentals of legislation. However, given the special nature of Russian-Belarusian relations, we have taken the decision not to extend the validity of these norms for citizens of Belarus

According to him, to perform this decision “will need to amend the current legislation”.

“The bill is already prepared and debated in the State Duma”, – said the Russian leader.

In his view, “the adoption of this document fully meet the principles of the allied interaction of Russia and Belarus”. The President of the Russian Federation Belarusian colleagues “focus on the further development of friendly Russian-Belarusian relations”.

Putin also said that he discussed with Lukashenko including the issues of security and stability in view of the upcoming December 21, the CSTO summit.

“In view of the upcoming December 21, the CSTO summit focused on issues of security and stability on the external borders of our organizations, joint fight against terrorism,” – said the Russian leader. 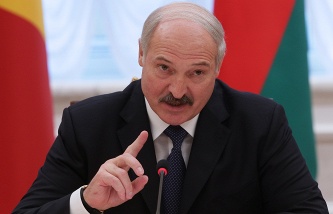 Lukashenka is in a difficult economic situation, warned the government experiments

Putin noted that during the negotiations were discussed in detail topical issues of bilateral and international agenda, with particular attention paid to the development of bilateral trade and economic cooperation. “Russia ranks first among foreign trade partners of Belarus, – Putin said. – Our market accounts for almost half of Belarusian trade”.

The Russian leader noted that due to currency fluctuations, bilateral trade in dollar terms has declined slightly in ruble terms, the volume of bilateral trade grew by 26% to 1.3 trillion rubles. The President added that these figures are obtained largely due to the fact that companies of the two countries actively resort to calculations in national currencies.

“This is about 86% of the total volume of trade,” said Putin, adding that the promotion of mutual investment, conducting a coordinated policy of import substitution, expansion of industrial cooperation and the competitiveness of enterprises remain among the main priorities.

Thus, according to the head of the state, 40% of Russian investments in the CIS countries falls on Belarus. “Created more than 3.5 thousand joint ventures in all sectors of the economy.” – he concluded.

Russia and Belarus will take measures to combat the practice of using unilateral economic coercion measures unauthorized by the UN security Council. This is stated in the statement of the two presidents Vladimir Putin and Alexander Lukashenko, signed after talks in Moscow.

The statement noted that the talks passed in an atmosphere of friendship, mutual understanding and trust.

Lukashenko thanked Putin for the warm reception and hospitality and invited him to visit Belarus with an official visit at a convenient for the Russian leader.