With the launch of the second leg of the power bridge to the Crimea will be able to get up to 1,000 MW of capacity, which will almost completely meet the Peninsula’s needs in electricity. 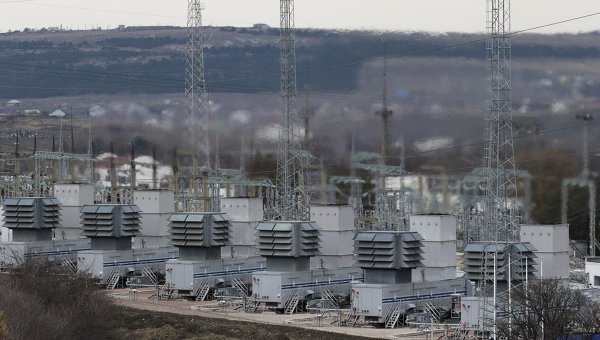 MOSCOW, Dec 15. The Crimea, at the end of November experienced energoblok, has taken another step towards energy independence from Ukraine. On Tuesday, President Vladimir Putin launched the supply of electricity in the Crimea on the second line of the power bridge from the Krasnodar region.

Launch of the second leg of the Peninsula can get up to 1,000 MW of capacity that, according to the Minister of energy of Russia Alexander Novak, will provide from 80 to 100% of needs of Crimea for electricity depending on time of day.

Crimea was completely disconnected on the night of November 22 as a result of blasting two transmission poles coming from the Ukraine. The power system of the Peninsula more weeks worked in stand-alone mode. In Crimea and Sevastopol were introduced a state of emergency, schedules of emergency outages.

In early December, was launched the first line of the power bridge from Krasnodar Krai with a capacity of up to 260 MW. Start the work gave also the President of the Russian Federation.

Concrete developments from the Kuban to the Crimea will consist of two queues or four threads. The second phase will increase the power flow to 800-840 MW. To complete the construction is planned in may 2016.

With the termination of deliveries from Ukraine in the Crimea began to increase the production of electricity from own power plants, including mobile, which in 2014 were transferred from the Olympic Sochi. Quickly became connected diesel generator set. Many households, as well as a significant part of the business, including hotels, banks, retailers, pre-stocked reserve energy sources.

The head of the Russian company on manufacture of generators in Crimea Alexander Nefedov told me that the first big wave of purchases of generators was last year, when Ukraine for the first time were turned off.

In the early days of a blackout sellers Crimean shops noted the growth in sales of uninterruptible power supplies offline battery chargers for mobile phones Power bank. There was a large demand for diesel small generators, batteries and inverters to maintain the health of individual heating boilers. Suppliers were unable to lift the goods.

After a week of energoblok in the everyday life of Crimean people steadfastly entered the energy terms. Limits, megawatts and concrete developments were discussed in the transport and on the streets.

To save power stopped working trolleybuses, minimized the movement of trains, for the purpose of security stopped all the elevators. All movement in the Republic occurred on buses and cars. The airport of Simferopol when it was stable.

The most difficult situation has developed in Eastern cities and districts of Crimea. Since the switch 145-thousand Kerch was supplied with energy through one turbine Reed-Burunskaya CHP, giving a total of 6 MW is less than 10% of the minimum needs of the city. These regions are the first and received electricity at the energy bridge from the Krasnodar region through the Kerch Strait.

The damage from the blackout of the Crimea from Ukraine amounted to about 4 billion rubles, but the catastrophic damage of the Crimean economy has suffered, said the head of Crimean Parliament Vladimir Konstantinov. All losses will be made up, he assured.

Ukraine partially resumed electricity supply to Crimea until 8 December, after the launch of the first line of the Russian energy bridge. Supplies are one of the four transmission lines. Their volume is about 160 MW.

The recovery of this flow took more than two weeks. First in the “Ukrenergo” stated that to repair the damages will take just a day or two, however, maintenance crews had to coordinate their actions with supporters of the blockade of the Crimea.

Despite the fact that Russia and Ukraine before the end of this year, has a contract for the supply of electricity to Crimea, Ukraine’s energy Minister Volodymyr demchyshyn said that Kyiv has no plans to resume supplies without the consent of the supporters of the blockade.

After a partial recovery of flow from Ukraine the President of Russia said that at the time of the full launch of the energy bridge from the Kuban to Crimea Russia should not have existing contracts with Ukraine for the supply of electricity to the Peninsula.

According to the Prosecutor of the Crimea Natalia Polonskaya, the organizers of energoblok of Crimea will be announced on the wanted list, and their property in Russia will be arrested. The Crimean Department of the FSB opened a criminal case under article “diversion”, which is punishable up to 20 years in prison.

On the way to energy independence

On Tuesday, when the start of the second leg of the power bridge was also introduced to the work of the newest Cafes in Feodosia substation with capacity of 220 KW. According to Novak, the substation was built in the shortest period of 1.5 years with the regulatory period is 2.5 years.

Additionally, there were 4 strands laid a cable across the Kerch Strait, which under the voltage of 220 KW will provide power flow to the Crimean Peninsula. In addition, built on Tuesday introduced to the work of 122 kilometers of transmission lines from the crossing point to the substation Cafe.

“Given today’s capabilities, the second circuit input of the power bridge will allow to transmit additional power to the Crimean power system (in the volume — ed.) with 200 MW in total 400 MW. Taking into account own generation and flows, the common features and the total capacity of the Crimean energy system will be approximately 1000 MW. It is 80 to 100% of needs of Crimea depending on the time of day,” said Novak at the ceremony of launching the second leg of the power bridge. According to him, the introduction will allow you to connect industrial enterprises of the Crimea.

In turn, the head of the Crimea Sergey Aksenov said that the staff on elimination of emergency situations in the Crimea will continue until complete independence of the Peninsula from Ukraine.

In addition to the power bridge to ensure energy security of the Crimea by 2019, the planned construction of two thermal power plants — Simferopol and Sevastopol on 471 MW each, as well as TPP in Taman with capacity of up to 660 MW.