MOSCOW, December 15. Russia considers closed the file on “alleged studies” Iran in the field of military use of nuclear energy. This was stated today by the representative of the Russian Federation in the IAEA Board of governors, Ambassador for special assignments of the Russian foreign Ministry Grigory Berdennikov at the extraordinary session of the Council on Iran. Text of the speech posted on the website of the Russian depodesta.

“I would like to stress the report’s conclusion that Tehran has fulfilled all its obligations under the “road map” agreed with the IAEA on 14 July this year in Vienna, he said. – Note of the Secretariat’s statement that the implementation of all measures envisaged by the roadmap, contributed to the establishment of a complete picture carried out in Iran works in the nuclear field. Signs of undeclared nuclear material and undeclared nuclear activities, according to the report, the IAEA has found that it is particularly important from the point of view of assessing compliance with obligations under the nuclear non-proliferation as one of the main goals of the safeguards system is to ensure control over nuclear material.” 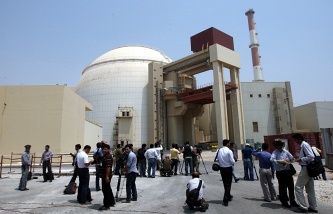 “We consider this page in the interaction between the Agency and Iran are reversed, and the dossier on “alleged studies” of Tehran’s military-nuclear orientation – closed – continued the Berdennikov. – Further cooperation between Iran and the IAEA will be built in the traditional Agency framework, on the basis of a comprehensive safeguards Agreement, Additional Protocol and voluntary commitments of Iran to ensure transparency in the framework of the Joint comprehensive plan of action (SITD)”.

The Russian side, said the Berdennikov, is pleased that “reached an understanding on a final settlement of the situation around the Iranian nuclear program is based on the formula proposed by Russian President Vladimir Putin, which implies the recognition of Iran’s right to peaceful uses of nuclear energy, including the right to enrich uranium, and a simultaneous removal of all sanctions after closing all outstanding issues and formulation of Tehran’s nuclear programme under strict international control”.

“Found in the negotiated solution is a clear evidence that any challenges to the nuclear non-proliferation regime can and should be resolved through diplomacy based on international law. Glad that in the end prevailed this approach,” said the diplomat.