The talks began at 18.25 GMT, they have been going on for twice as long as originally scheduled time. Opening the meeting with Lavrov and Kerry, Putin stressed that Russia and the US are looking for the solution of the complex crises. 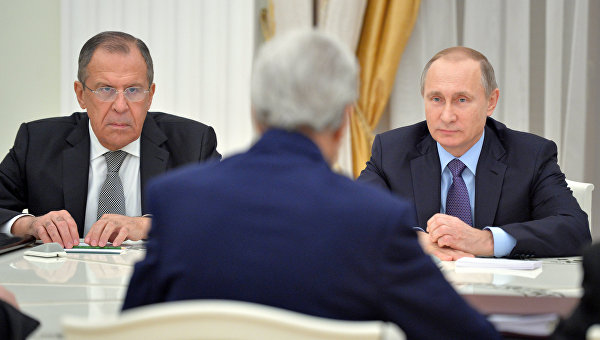 Meeting the Russian leader with the foreign Ministers of the two countries started at 18.25 GMT. Following the talks, Lavrov and Kerry at the Ministry of foreign Affairs of the Russian Federation, during which the parties discussed the settlement of the conflict in Syria, the prospects of uniting efforts in the fight against international terrorism, the Ukrainian crisis and bilateral issues.

Opening the meeting with Lavrov and Kerry, Putin stressed that Russia and the US are looking for the solution of the complex crises. He said that the Minister briefed him on the proposals of the USA and some of the issues that require further discussion. Kerry, in turn, said that negotiations on the Syrian settlement enables a host of new opportunities and the United States and Russia together can do a lot.

From the Russian side in the meeting participated also the Russian presidential aide Yuri Ushakov, the Director of the Department of North America of the foreign Ministry of the Russian Federation Georgy Borisenko. On the American side, Deputy Secretary of state Victoria Nuland, special assistant to the U.S. President for Russian Affairs Celeste Wallander, Ambassador extraordinary and Plenipotentiary of the USA to Russia John Tefft.