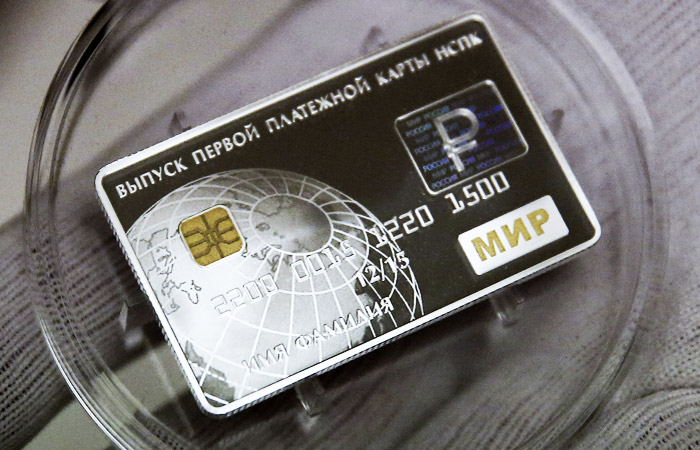 Moscow. December 15. The national system of payment cards (nvqs), the “daughter” of the Bank of Russia, on Tuesday announced the start of production of national maps of the “World”. According to the Deputy Chairman of the Bank of Russia Olga Skorobogatova, “almost every citizen wants to have” a map.

The first banks that issued the cards, “Peace”, steel Gazprombank, MDM Bank, Moscow industrial Bank, RNCB, Rossiya Bank, Sviaz-Bank and SMP Bank. All they have previously successfully completed tests on the performance of the cards in their infrastructure and started the phased provision of card acceptance “World” in its network of ATMs and terminals. To date, fully implemented the basic functionality of payment cards: issuing and depositing of cash at ATMs, payments for goods and services, money transfers from card to card.

Chapter nvqs Vladimir Komlev said Tuesday at a press conference that these banks have issued cards of different levels – debit, prepaid, classic and premium, all of these products were carried out test of transaction in the infrastructure of the seven banks. “I personally have submitted maps of all seven banks,” he said.

The second group of 21 of the Bank-participant of the pilot project already started testing the cards “the World” and plans to complete it before the end of 2015. In 2016, the banks will start to accept the cards in its acquiring network and will launch a national payment card. All these banks are the acquirers, some of them are also card issuers “World”.

Currently, participants in the payment system “World” have become 35 Russian banks, including the largest, Sberbank of Russia, VTB 24, Alfa-Bank, etc. adherence to the rules of the payment system “World” means the intention of banks to participate in the issue and acquiring payment cards of the national. In addition to the seven first banks and the second group of 21 banks there are seven banks that are in the process of developing roadmaps and connected to the system, said Komlev.

“Of course, our active engagement of the banking community, on entry into the payment system not only does not end, it just started, we see great prospects for joining at least the same number of banks from the very beginning of 2016”, – said the head of nvqs.

Now in the framework of the pilot issued a maximum of a few thousand cards, said Komlev. However, the banks already have “concrete plans to release tens of thousands and by some banks – and hundreds of thousands of cards in the near future”, bulk production can begin as early as the first months of 2016. At the same time, mass production – “millions and millions of cards” – the NPCs plans in the second half of 2016, when will be ready the infrastructure for accepting cards, “Peace”, he said.

“Our analysis shows that almost every citizen wants to have the card “the World”, I can honestly tell you. Maybe you are thinking on this subject, but I think in the first or second quarter you will want to get it,” said Skorobogatova.

She also stressed that one of the purposes of creation of nvqs was to provide the opportunity for issue and servicing of payment cards in Crimea, and the issue of cards, “Peace” will solve this problem. “We hope that in the coming months our citizens in Crimea will feel confident and secure,” said Skorobogatova.

Speaking about the tariffs for card issuance “World” for banks, the Chairman of the Central Bank stressed that “the rates and terms of the NPCs you need to look at the complex”. “It is obvious that in General the terms are more favourable for banks from an economic point of view,” she said. Thus Skorobogatova said that if banks will seek proposals to revise the complex commissions, the NPCs are willing to consider this issue.

How to use maps

Now the main thing for NPCs is to expand the network of reception of cards “the World,” said Komlev. “It is important that card was just released, and this card could pay. This is the main task for us is the disclosure of a network of banks so that within their existing infrastructure it was possible to use cards of payment system “the World,” he said.

“We aim that by the end of the third quarter of the reception network should reach about 90% of the network reception (all payment cards – approx. If), which in General have on the country,” he said. Advertising mass distribution of cards “the World” is scheduled to begin in the second half, and if three-quarters of the existing network will be available, “we can talk about a comfortable level to start mass emissions”, says the head of the NPCs.

According to preliminary estimates Komleva, now we can talk about that more than 1.5 thousand ATMs and hundreds of POS terminals (the terminals with the process is slower, because you need to sign additional agreements with retail outlets) is connected to the payment system “World”. However, as followed from words of representatives of RNCB, SMP Bank, MDM Bank and Sviaz-Bank, now we are talking about a much broader network – several thousands of ATMs and thousands of POS terminals.

Skorobogatov reminded that the cards “the World” will be available abroad if it will be kobegenova card with international systems. She noted that at the stage of application development nvqs kobegenova signed agreements with MasterCard, American Express and JCB Japanese.

“We are actively discussing the topic of cooperation with the (Chinese system – approx. If) UnionPay. We believe that it would be extremely promising to conclude an agreement kobegenova with this payment system. I hope that in 2016 we will be able to negotiate,” she added.

Komlev noted that Gazprombank already produces kobegenova map “the World”-Maestro, some banks are also planning to release kobegenovich cards. Sviaz-Bank’s press-release reported that since the second half of 2016 to begin producing kobegenovich cards with MasterCard or JCB.

Komlev assured that the card “World” already has a very good functional level – this is basic operations on cash withdrawal and purchases, for use in e-Commerce, transfers from account to account, etc.

According Skorobogatova, also is actively working on the implementation of transport applications on the cards “the World” that citizens had the opportunity to use them as travel. “Are very active with the Ministry of communications, Ministry of industry and trade for the development of applications that can be combined with our card,” said she.

The head of the NPCs also said that the company is working on technological innovations. “We are in the beginning of the year to release the specification for a contactless application, a little later – the specification on the mobile app. Believe that when will begin mass distribution of the card, these products will be included in our product line,” said he.

In addition, the NPCs develops its own system for secure authentication in the Internet and mobile Commerce. “We are focused on this work,” said Komlev.

The Bank of Russia in honor of the start of the project on Tuesday released a commemorative silver coin in denomination of 3 rubles “the Release of the first payment cards of the National payment system of Russian Federation”.

Coin of unusual shape is a rectangle with a length of 51.0 mm and a width of 32.0 mm with rounded corners. Weight of precious metal in purity is 31,1 grams. Circulation – 5 thousand copies.

On the reverse side of the coin reproduces the image of a payment card “the World” with the traditional processing of payment card details and elements, at the top there is an inscription “the Release of the first payment card of the NPCs”.

“Coin with custom design. We wanted to emphasize that the payment card is a tool for all types of payments. This coin will be distributed through commercial banks,” – said Skorobogatova.