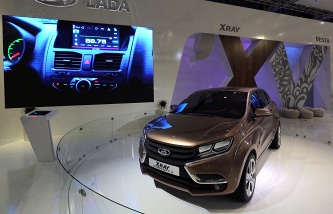 “I’m sure this model will be sold not only in Russia but also abroad. Now the difficult time – during 10 months of sales in the automotive market in the country fell by 34%, so to produce new models – it is very important that people have confidence,” said the Governor of Samara region Nikolai Merkushkin at the opening ceremony of start of production.

According to him, investment in this project amounted to about 12 billion rubles. Great support AVTOVAZ in the financing provided state-owned banks, said the head of the region.

The plan of production of new models starting today – 50 cars per day. Already brewed 200 bodies Lada XRAY, the end of the year will be brewed 490 bodies.

Off the Assembly line a car equipped with manual gearbox and engine capacity of 1.6 liters and 110 HP from the Alliance “Renault-Nissan”. Further on Lada XRAY will also set the base engine and robotized transmission (AMT) production of “AVTOVAZ”.

As previously reported, Xray – high compact hatchback, made in the style of SUV (Sport Utility Vehicle). The car will be the second production model after the Lada VESTA, new brand “X”-style. Lada XRAY created in the framework of cooperation of “AVTOVAZ” with the Alliance “Renault – Nissan”, the new products we developed over 500 original parts. The production model is organized on the most modern Assembly lines of AVTOVAZ – B0.

By the end of the year in Togliatti it is planned to produce about 500 cars Lada XRAY. Emphasis will be placed primarily on the quality of each assembled car, not on the fulfilment of quantitative plan for the Assembly, stressed in the press center of the plant.

The start of sales of Lada XRAY is scheduled for February 2016. As stated earlier, the carmaker, this model, along with Lada VESTA should be a catalyst for change of image of Lada in the Russian market and help greatly to strengthen the position of the brand in major Russian cities.

Lada XRAY – the second major premiere of “AVTOVAZ” this year after the car Lada VESTA, the production of which was launched at the plant “IzhAvto” less than three months ago, on the 25th of September. In their new model of “AVTOVAZ” invested in 2015 about 30 billion rubles.