The visit of John Kerry to Moscow is timely, it is especially important that the initiative of the negotiations came not from Russia but from the US, said the head of the international Committee of the Federation Council Konstantin Kosachev. 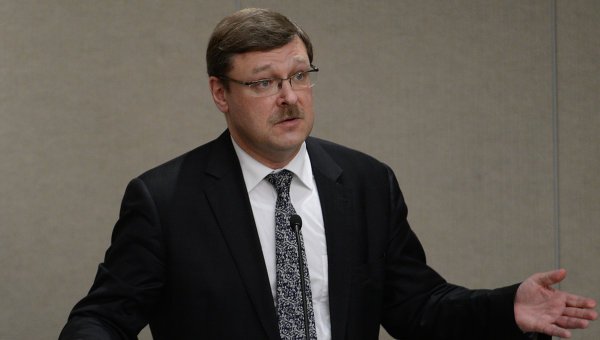 MOSCOW, 16 Dec. The visit of U.S. Secretary of state John Kerry to Moscow suggests that Americans are beginning to understand the need to work together, the head of the international Committee of the Federation Council Konstantin Kosachev.

“Russian-American talks in Moscow are timely, and they may be useful. The visit of Kerry to Moscow, as I can see, there were at least three important component”, — Kosachev wrote in Facebook.

“First, the negotiation initiative proceeded not from Russia but from the USA, and that in itself speaks volumes. Have long been obvious, in any case, we in Russia, a bitter dispute over Crimea and (Syrian President Bashar) Assad, excites minds and emotions for the past months, even if allowed the parties to once again dot the i, have not added anything substantial to the solution of problems in Ukraine and Syria,” — said the politician.

According to him, now the absurdity of the situation long-standing dispute for the sake of the dispute begins, apparently, reach up to Washington or Barack Obama, “which is under heavy pressure from “hardliners”, but aims to sustain the line that the US must solve the global case not alone but with partners”. “Success with Iran is one of the few in the eyes of Americans examples to the correctness of such Obama’s positions, but such examples requires much more,” says Kosachev.

He believes that the slogan of isolating Russia, most likely, Americans will no longer put forward, and the policy of sanctions permanently marked “Minsk” the limit, no way associated with the Crimea. “Although it’s sluggish, but sounded the thesis about the responsibility for the implementation of the Minsk agreements not only of Moscow, but “all parties to the conflict”. Well, in Kiev, this thesis is finally heard and shuddered,” — said the Senator.

He stressed that now “there is still a manic obsession with resignation of Bashar al-Assad,” and in the list of terrorist organizations, with which Russia and the United States together ready to fight in Syria, there are at least two non-disagreement point is IG (in the Arabic version of DISH) and “An-Nusra”. “Two days later, at another meeting in new York expanded list, more or less understandable to both Americans and us, may be certified by the UN Security Council,” Kosachev wrote.

The Senator pointed out the difference, however, in which points of mutual distancing from each other the two countries were six months ago, during a previous visit of Kerry to Moscow. “Yes, during this time, Russia had to show character. I had internally and in the extreme stage, when other options left. Events confirmed that this was done for a cause, not for the sake of demonstration of the flag. Although the flag was useful to show. And it means that we are on the right path,” he concluded.