Big press conference Putin is every time not just answers to questions, but also a real gift to journalists, coming up with titles. Many phrases of the Russian President became the cruise now and have healed their lives. Collection of the most vivid expressions from the press conferences of previous years – compilation. 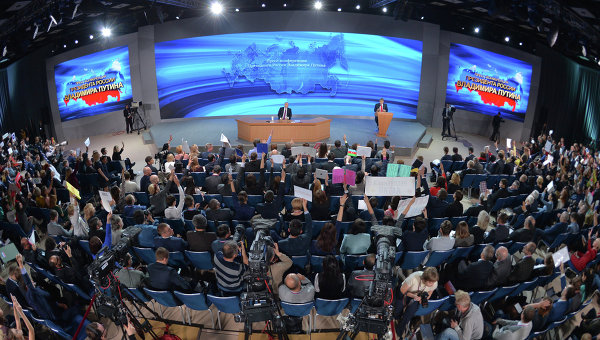 About Russia and the West

“Whatever we do, always encounter problems, opposition, struggle with us. Endless. I’m at the Valdai club drew a comparison. If bear our sit quietly, not chasing pigs through the taiga, maybe it alone will not leave? Will not leave. Always it will try to put on the chain. <..> And once that happens, and bear. Effigy of him to do. And then taiga will immediately begin to clean up. We have heard direct statements from officials in the West, it’s unfair, when Russia belongs to Siberia” (December 18, 2014).

“As for Palace coups — calm down, we don’t have palaces, so a coup “Palace”. We have the official residence — the Kremlin, it is well protected, which is a factor of our state stability,” (December 18, 2014).

“It’s not the frozen stuff, and it should be treated seriously. What does it mean to be serious in my understanding? The thing to do, work to work and not think about how save — extra office phone or rating” (18 December 2014).

About the job as President

“All these eight years I plowed like a galley slave, from morning till night, and did it with full return of forces… All my life for these eight years — as long business trip which took me out of the normal schedule of human life” (14 February 2008).

About the anti-American rhetoric

“In terms of rhetoric, anti-American, anti-Western, and any other country you can name, we do not need some kind of anteriority. It is always harmful. But we’re with you, or I’m a bad Christian: when you’re slapped on one cheek you should turn the other, but I’m still not mentally ready. If we are slapped, we must respond. Otherwise we will always be to spank” (20 December 2012).

About his management style

“I think that people, at whatever level of management he was not, should never evade responsibility for the exercise of its powers. This is a fundamental and most important question. As soon as the first person or state or region or municipality begins to shirk responsibility, think — down the drain, it all starts to crumble. And this is a fundamental issue” (19 December 2013).

About the color revolutions.

“If we talk about the post-Soviet space, I was particularly concerned about attempts to solve political issues, non-legal way. This is the most dangerous. The most dangerous thing, you know, the creation of a system of permanent revolutions — the “rose”, some “blue” still come up. To live need to get used to the law” (23 December 2004).

About the rumors about health

About results of work

“Man can never be satisfied with the achieved results, if he is in sound mind and memory is. You always want more. However what has been done over the previous period, I believe it is a satisfactory result” (31 January 2006).