MOSCOW, December 16. Russian regions may be allowed to set any time limit the sale of alcohol, including absolute prohibition. As reported on the official website of the government of the Russian Federation, speech about it went at the meeting of RF Vice-Premier Alexander Khloponin with representatives of Federal and regional Executive authorities on regulation of retail sales of alcohol products. 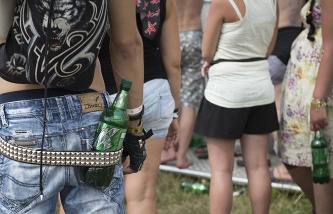 VTSIOM: more than 70% of Russians support raising the minimum age for sale of alcohol

“Khloponin instructed the Ministry of industry and trade in the first quarter of 2016 to prepare proposals on amendments to the law on trade, which will expand powers of subjects of the Russian Federation regarding the introduction of special requirements to trade certain types of such products, – stated in the message of the Cabinet of Ministers. – These measures can allow regions, including imposing restrictions on time and place of trade up to a full ban on the sale of products.”

The meeting noted that in recent years recorded growth of poisonings and deaths from the use of alcohol-containing dual-use products – substitutes, perfumes, denaturate, etc. the products are sold legally in several times cheaper than alcoholic beverages, with a turnover not controlled.

Vice Prime Minister stressed that the penalties for selling alcohol without a license should be so hard to market participants was better to legalize your business than working in the informal sector. “At the same time to reduce the burden on the legal business of the Federal bodies of Executive power mandated to speed up the elaboration of the question of the introduction of a diversified approach to the establishment of state duties for issuance of licenses,” – said in the government.

From 2016 the sale of alcohol throughout the territory of Russia will be carried out with the help of the Unified state automated information system. From 1 January next year, provides for the introduction of EGAIS in the wholesale segment, as of 1 July for retailers.

Khloponin instructed in the first quarter of 2016 to study the issue of applying the mechanism of tax deductions for retail organizations to purchase equipment EGAIS and its implementation.