The first delivery of the MRJ aircraft will be carried out almost a year later than previously planned. Initially the launch was scheduled for April-June 2017. 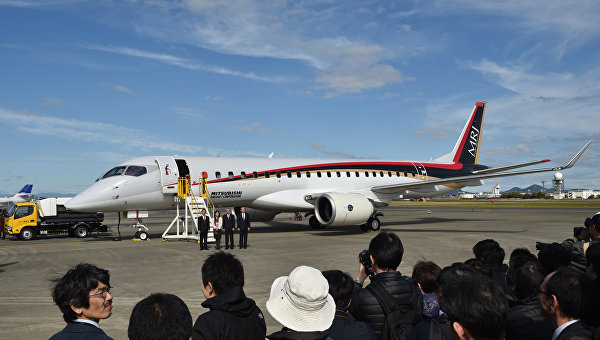 This forecast was released on Thursday the Agency Kyodo. The first delivery of the MRJ aircraft as one of the leading Japanese airline All Nippon Airways (ANA) was initially planned for April-June 2017. The reasons for the delay of delivery have not been announced.

Developed by a division of Japan Corporation Mitsubishi Heavy Industries — Mitsubishi Aircraft Corporation — regional jet Mitsubishi Regional Jet (MRJ) is the first in more than a half-century passenger aircraft made in Japan. The aircraft was presented to the public in October last year. The aircraft flying range is from 1.8 to 3.7 thousand kilometers.

MRJ is represented in several versions. The first version of MRJ 70 has a capacity of 78 seats. The second option MRJ 90 with an elongated fuselage designed for 92 passengers. The company did not exclude that in the future you may receive a modification with a capacity of about 100 seats. To date, Mitsubishi Aircraft Corporation has received orders for 407 MRJ aircraft in various modifications.

The first test flights of the aircraft took place on 11 November this year. To obtain the so-called “security certificate” of the new aircraft pilots shall have completed five MRJ at least 2.5 thousand hours until mid-2017.