SEVASTOPOL, December 17. /Corr. Janina Vaskovsky/. Ferry “Varyag” was, until recently, served the crossing in the Turkish town of Zonguldak, next year will go to Abkhazia. The journalists said the Governor of Sevastopol Sergey meniailo. 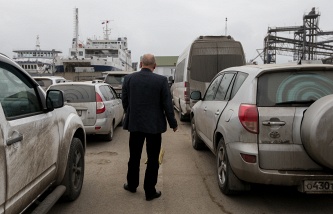 From Sevastopol to Turkey on 30 November, the ferry will come to pick up the Crimean truckers

“For ferry “Varyag”, who last week returned to our truck drivers from Turkey, now agreed the issue with Abkhazia. This option compensates for the private route. I help companies from the point of view of the organization of delivery here and send out the goods. He will walk there and back loaded, otherwise it will not be profitable”, – said Menyailo.

Managing Director of the company “Peleng”, which is the owner of the “Varyag,” Dmitri Vinnikov told reporters that negotiations with the government of Abkhazia took place last week.

“When Turkey was aggressive, we decided the relationship with her to interrupt. We planned deliveries from the Crimea to Abkhazia of our products. Perhaps we will carry products of the Soda plant, Crimea Titan, cereals. From Abkhazia – vegetables and fruits and other food to replace the Turkish component,” Vinnikov said.

According to him, the exact route is being considered different ports from the point of view of possibilities of loading. The number of flights will depend on the loading of the ferry. “We hope that this fully compensates for the Turkish route. In addition, considering the routes to Egypt and to Syria, watching the logistics. Consider the Novorossiysk, but there’s no tangerines,” said Vinnikov.

He also said that during the visits of the “Varyag” in Turkish ports there were representatives of the Ukrainian government, which are fixed steam. “Are they on the pencil. However, the businessmen of Turkey are very friendly and would like to continue working. They understand that losing a big market. Especially because they have this year a good harvest,” said Vinnikov.

The company plans to “Bearing” to increase the amount of investments into the economy of Sevastopol on 500 million roubles and to construct a logistics centre for the supply of Crimea. “We consider the possibilities that will arise after the construction of the bridge. It is the receipt of the goods at the port, sorting, storage and forwarding by rail and road transport,” said managing Director of the company.