MOSCOW, December 17. An hour before the “big” press conference of Russian President Vladimir Putin in hall of the international trade Centre (ITC) there are no free places. 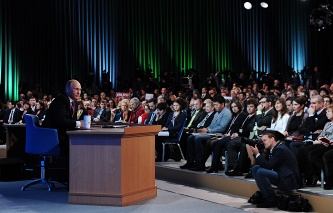 Accredited journalists – and this year, 1390 – began to gather in the Center for four hours prior to the event and lined up to the entrances to the hall. Reporters with a more stable nervous system whiled away time in the canteen, stationary computers in lobby, and interviewed each other, sharing memories of previous press conferences and building projections for the current.

At the moment, journalists are most interested in, whether they will be able to ask your question, and how long will the press conference. In 2014, for example, does not justify the assumption that Putin will beat his own record of duration of communication with media representatives in 4 hours and 40 minutes – then he answered questions for 3 hours and 10 minutes.

As in previous years, many came to ITC with “pickles” – various posters (handwritten, printed), bright scarves and flags.

Going to the press conference must go through two stages of security checks. So, at the entrance to the WTC after the inspection ask journalists to leave brought food and drinks. Already at the entrance directly to the room of reporters are waiting for another document check.