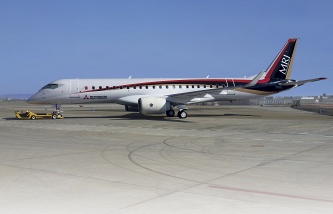 On Wednesday the company announced that the first delivery of the aircraft for one of the largest carriers in Japan, All Nippon Airways, scheduled for April-June 2017, has been postponed. In a published joint statement the reasons for the delay, which has become the fourth, however, is not specified.

MRJ is the first in more than 50 years short-haul passenger aircraft of Japanese design. It has a range of from 1.5 thousand to 3.4 thousand kilometers. Depending on the modifications he is able to carry up to 90 passengers. The aircraft has capabilities similar to the Russian Sukhoi Superjet 100. The development of liner was carried out in 2007 and cost about 180 billion yen ($1.6 billion). In November of this year, the aircraft successfully made several test flights. After completion of all tests, according to experts, he will undergo a complex certification procedure.

Mitsubishi Aircraft announced that it had orders for 407 liners for a total amount of 150 billion yen ($1.4 billion) from Japanese airlines and carriers from the US and Asia. Hope MRJ entrusted to major Japanese carriers JAL and ANA, which expects it to resume some domestic flights, which previously they had to refuse.