In this year’s event a record number of accredited journalists – 1390 representatives of Russian and foreign media. 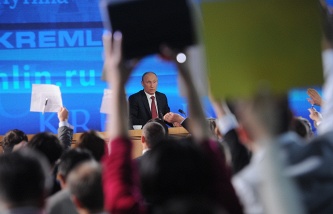 Putin began a tradition of annual meetings with representatives of the media in 2001, when the press-service of the Kremlin have accumulated a huge amount of requests for interviews with President. Since then, the interest in what he says to the President, is only growing.

Putin interrupted the annual press conferences only for the period when he served as Prime Minister from may 2008 to may 2012. However, after the election of the head of state for six years in 2012, he resumed this practice.

The first seven press conferance took place in the 14th corps of the Kremlin. After closing the communication of the President with the press was held in world trade center on Krasnopresnenskaya embankment.