The press conference started with a question about the current economic situation in Russia. The first hour was devoted to the discussion of domestic policy and international agenda – relations with Turkey, the conflict in Syria and the situation in Ukraine. 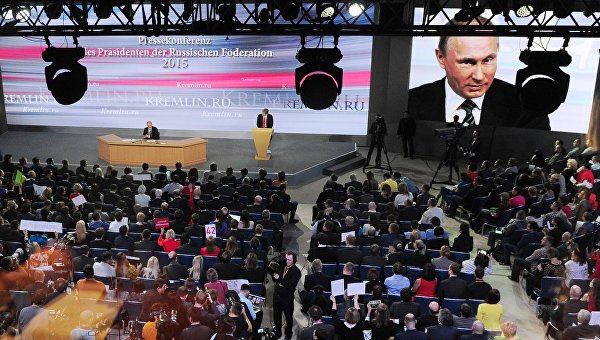 The press conference began with the question of the current economic situation in Russia. The President stated that the Russian economy had passed the peak of the crisis, from the second quarter of 2015, the Russian economy is showing signs of stability, but the situation on the labour market compared with 2008 sustainable. In addition, according to the President, despite the closure of the Russian Federation for access to external markets, Russia fully complies with its obligations to international lending organizations, and external debt declined by 13%.

As for the Russian government, Putin said, no significant changes in the near future in the Cabinet is not expected, and personnel reshuffle only hinders the work. The head of state noted that in General, the Cabinet of the Russian Federation operates effectively, but is not yet of sufficient quality solutions. “As satisfied or dissatisfied with (the work of the Cabinet), I believe that the work is satisfactory. Of course, we need to work better,” Putin said.

A significant part of questions was devoted to the international agenda. Not without questions about the relations of Russia and Turkey, which escalated because of a downed Russian aircraft su-24. The Russian leader said that Ankara had committed a hostile act, shooting down the fighter, then began to hide behind NATO, instead of having to explain yourself. Putin also noted that Russia was ready to cooperate with Turkey very sensitive to her issues, Ankara could discuss their interests on the border with Syria through the existing channels of cooperation.

Putin told journalists that Ankara offered Moscow ideas that do not fit into international law, sensitive to the Turkish side. However, according to the President, with the current Turkish leadership is almost impossible to negotiate, and the Russian Federation do not see any attempt on their part to establish relationships.

With regard to the participation of Russia in operations in Syria, Putin said, Moscow will seek to ensure that decisions on the cap arranged all parties to the conflict and that political settlement was possible. The President also said that Russia supports the US initiative for the preparation of UN security Council resolution on Syria, which can arrange and Syrian authorities. Putin also said that the operation HQs of the Russian Federation in Syria poses a serious burden on the budget.

The settlement of the situation in Ukraine was also interested in journalists. Putin said that Russia expects worsening of economic relations with Ukraine, from 1 January 2016, although it sought to maintain the current level of cooperation. He also said that Russia is not going to impose against Ukraine, any sanctions, but EU leaders asked Russia not to deprive a sister state preferences in trade and not to be excluded from the CIS free trade area.

Putin also added that Russia is interested in the soonest resolution of the conflict in Eastern Ukraine, hopes for an open and honest dialogue to resolve the conflict in the Donbass.