In early 2016 the Russian government must approve the amendments for the abolition of the vehicle tax for trucks over 12 tons. After the introduction of “Plato” the transport tax was not repealed at the insistence of regional leaders 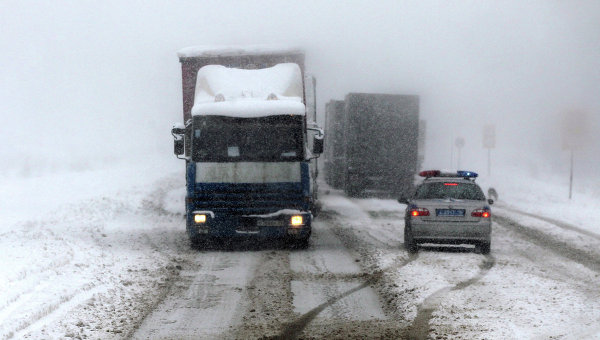 MOSCOW, 17 Dec. The President of Russia Vladimir Putin hopes that the government early next year to endorse the amendments on the abolition of the transport tax for cars cargo capacity over 12 tons, since the owners are from November 15, will be charged tolls on Federal highways.

The operator of the system of charging heavy vehicles under the name “Plato” is the company “RT-invest the transport system”, which in equal shares belongs to Fund “RT-invest” and the son of Arkady Rotenberg Igor. Under the agreement signed by RTAS with the Federal road Agency, the concessionaire, at its expense, constructs and maintains the system throughout the term of the agreement, which is 13 years old.

The creation of this system has cost RTAS 29 billion, 27 of which borrowed funds of Gazprombank. The state will remit to the operator at 10.6 billion rubles per year for operation and maintenance of the system. The current rate for heavy vehicles — 1,53 rubles per kilometer, the proceeds from the toll go directly to the road Fund of the Russian Federation.

Instead of tax —patent

The transport tax after the introduction of “Plato” was repealed at the urging of regional leaders, because the transport tax goes to regional budgets, explained Putin. “But at least for heavy vehicles, which must pay for mileage, it has to be done. I very much hope that the government very soon, early in the year it will make”, — the President said at a press conference.

According to him, the carriers need to get away from the “gray schemes” and the state “and the system output, and at the same time not to overload various levies, fees and taxes”. The solution the President sees in providing carrier opportunities to buy cheap patent. But, according to him, there is a problem. “What it is that patents are issued for a year, and there may be seasonal transportation. Let the government think about it in advance and do it,” he added.

Money — in the road

Answering questions of journalists about “Plato”, which was accompanied by numerous protest actions, the President underlined that all the proceeds from the toll collection from heavy vehicles are not in a private pocket, and fully in Federal road Fund.

“You need to look into the problem, try not to use a particular difficult situation in some quasipolitical order, and look inside. But what’s inside? All fees that come from the so-called “Plato”, 100% do not go to someone in your pocket, they go 100% to the road Fund of the Russian Federation, to the last penny. And from there all these fees to the last cent go to road construction in the regions of the Russian Federation”, — said Putin.

The President drew attention to the fact that the money allocated to RTAS government system “Platon” can and must be fully monitored.

“Where did you receive funds for a joint venture between Russian technologies and the firm that represent individuals? They receive this money directly from the budget. In my opinion, there amount 10 billion (rubles). What? To repair this system, to maintain it in serviceable condition, to development. But what does it mean that they receive money from the budget. This means that everything can be checked, including the public and the accounting chamber, which is extremely important. If someone believes that these costs — for maintenance, for development is high, may consider and impose. And it will be correct — to calculate and present”, — said the head of state.