MOSCOW, December 17. Press Secretary of the President of Russia Dmitry Peskov is confident that relations with Turkey will become one of the most important topics at today’s press conference of Vladimir Putin. He stated this on Thursday in an interview with TV channel “Russia 24”. 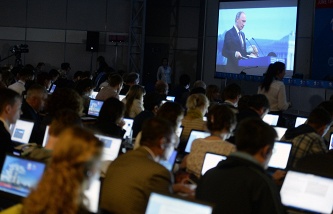 Sands, for some time worked in the Russian diplomatic mission in Turkey, recalled the words of the head of state, who after the incident with su-24 bomber has expressed bewilderment why the Turkish authorities decided on such a treacherous blow, inflicting damage to bilateral relations, which until then rested on a solid Foundation.

“I can’t understand it,” said Sands, noting that the incident “can only regret”.

At the same time he recognized that many Turkish media offered their services, to allow the Russian leader to convey their point of view on what happened to the Turkish public. “However, as the Russian President has already spoken on this subject loud and clear, we found it possible to abandon the proposals of the Turkish media,” he said.

At the same time, he said that “as far as I know, the representatives of the Turkish press were accredited to the press conference”.