The UN, on December 18. /Corr. Oleg Zelenin/. Illegal export of energy resources by the terrorist group “Islamic state” (IG) is $1.5 million per day, and most of the oil sold through Turkey. This was stated on Thursday at a meeting of the Security Council, the permanent representative of the Russian Federation to the UN Vitaly Churkin.

“The largest volume of oil products sold through Turkey,” he said. The diplomat listed the border crossings that go through the tank truck, the number of which “is measured in thousands”. “Their supplies for ISIL is engaged in a number of Turkish companies, including “Series” (city of Konya) and “Otomotiv” (city of Antakya)”, – he said. 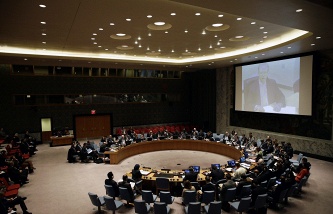 December 2, Deputy Minister of defense of Russia Anatoly Antonov said that the top leadership of Turkey involved in illegal extraction and transportation of Syrian and Iraqi oil.

“The main customers for this stolen from the rightful owners of Syria and Iraq – oil is Turkey. There were reports in this criminal business involved the highest political leadership of the country, President Erdogan and his family. We have repeatedly talked about the dangers of flirting with terrorists,” – said Antonov.

In addition, the Ministry of defense identified three major routes of transportation of oil from Syria and Iraq into Turkey. The Western route goes from Turkish ports on the Mediterranean coast, North – to a refinery Batman, the Eastern – the major transshipment base in the settlement Cizre.

The U.S. Treasury: the Turkish authorities do not purchase oil from the Islamic state group

Later, the Russian foreign Minister Sergey Lavrov promised that the facts about oil trading in Turkey will be presented officially in the UN to all stakeholders. “That oil from the Islamists captured fields in Syria and Iraq flows abroad, particularly in Turkey, we have repeatedly said publicly. The evidence that supports these circumstances, will be formally presented, including the UN, to all interested parties,” said Lavrov.

Recep Tayyip Erdogan earlier said he was ready to resign, if it is confirmed information about his country’s purchases of oil from ISIS. December 8, his son Bilal Erdogan gave an interview to the newspaper Corriere della Sera, which claims any involvement in illegal oil trade. “I don’t do sea shipments. In addition, ISIS – the enemy of my country, denigrating my religion,” said Bilal Erdogan.

According to the Ministry of Finance of the USA, the illegal oil trade brings extremist “Islamic state” in Syria and Iraq about $40 million a month. This amount does not include revenues from the sale of natural gas.

Other revenue in the budget of the Islamist relies on ransoms for hostages, which varies from $10 thousand to 50 thousand per person, not to mention “poduska tax”, under which fall both Christians and Muslims.

In addition, ISIS actively selling on the black market in objects of cultural and historical value. The monuments, like the ancient temple of Baal-Shamin in Palmyra Syrian, they remorselessly destroyed.