ROSTOV-ON-DON, December 18. /Corr. Dmitry Bulanin/. The defense of former Ukrainian army Hope Savchenko does not expect that her sentence could be imposed earlier than February 2016. This was reported by one of her lawyers Nikolai Polozov. 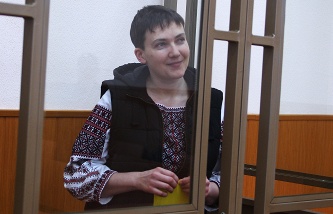 The Donetsk court extended the arrest of Hope Savchenko until April 16, 2016

“The most important point in the next month will be January 25. This is the opening session of the parliamentary Assembly of the Council of Europe (PACE), which is a delegate Nadiya Savchenko. And it is obvious to me that politically Russia is not profitable will pass sentence before that session. And at the time of this session until January 31, the court does not decide the sentence,” – said Polozov.

Earlier Donetsk city court painted the dates of the meetings for January 2016 on Mondays, Wednesdays, and Thursdays until January 28th.

The lawyer found it difficult to answer, how long will it take the defense to present all the evidence. “We have enough evidence and it will take some time. We are constantly denied, and no petition not granted. We have supposed experts, written evidence, the results of examinations confirming the alibi of Hope Savchenko”, – said the lawyer.

He stressed that the defense has a number of witnesses whom lawyers would call the court, but it is unlikely to succeed, as in Russia, they are waiting for the prosecution. “We have witnesses from Ukraine from among units of the armed forces. It is unlikely that they will be allowed to interrogate, as the court took a sharply accusatory. He fully supported the position of the prosecution. So no matter what any what the benefits and even the implementation of legal rights we in this court do not hope,” – said Polozov.