YEKATERINBURG, December 18. The mayor of Yekaterinburg Yevgeny Roizman not exclude the participation in elections of the Governor of Sverdlovsk region, which will be in 2017. He said.

“I do not exclude its participation in the elections if a candidate will be placed Evgeny Kuyvashev (the current Governor of Sverdlovsk region – approx.), just so its not to let. Just have,” said Roizman. 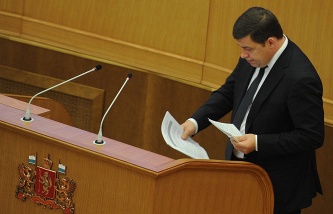 If the Kuyvashev will not go to elections, the mayor of Ekaterinburg is ready to support any “reasonable candidates”. As an example, Roizman has led the General Director of UMMC-Holding Andrei Kozitsyn, the former mayor of Ekaterinburg, and now a Board member of the Federation from the Sverdlovsk region Arkady Chernetsky, the head of Nizhny Tagil Sergey Nosov, President of the government of Sverdlovsk region Denis Pasler. “Many decent people who would become the Governor of the Sverdlovsk region, I would be one of them supported”, – said Roizman.

Yevgeny Roizman, a former head of Fund “City without drugs”, was elected mayor of Yekaterinburg in autumn 2013. It has put forward regional branch “the Civil platform”.

The former Plenipotentiary representative of RF President in the Urals Federal district, member of United Russia Yevgeny Kuyvashev, may 29, 2012 vested powers of the Governor legislative Assembly of the Sverdlovsk region on the proposal of Russian President Vladimir Putin.

The gubernatorial elections will be held in the Sverdlovsk region in 2017.