UFA, December 18. /Corr. Nail Shachmaliev/. German concern Siemens offers an updated version of “Sapsan” for use on high-speed railway (HSR) “Moscow – Kazan”. Reported about it in interview of General Director of Siemens in Russia and Central Asia, Vice-President of Siemens AG Dietrich Moeller. 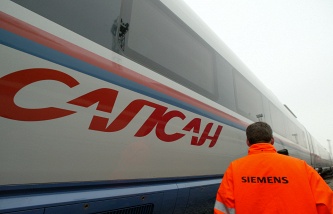 Siemens will invest 3.5 billion rubles in maintenance depot “Peregrine” and “Swallows” under Vladimir

“We have a ready solution on the rolling stock, which could be used on HSR “Moscow – Kazan”. We are talking about the updated version of “Peregrine”, potentially capable of speeds up to 400 km/h. These models differ in their efficiency, aerodynamics, low noise level in cars and a high level of comfort for passengers,” said Moeller.

According to him, the company is interested in participating in the project HSR. “Currently, work continues within the framework previously created by the German initiative for HSR, which unites a number of companies engaged in the field of railway transport, construction and Finance”, – said the Agency interlocutor.

Moeller added that Siemens has a rich experience of implementing similar rail projects in many countries.

From December 2009 trains “Sapsan” ply between Moscow and St. Petersburg, and from July 2010 between Moscow and Nizhny Novgorod. Speed reaches 240 km/h. Train “Sapsan” made in Germany “Siemens”. The name they received in honor of the world’s fastest bird of the Falcon family. 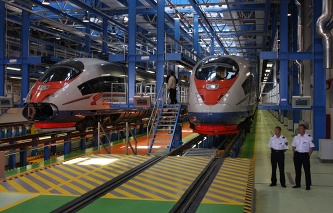 The chief incident: the growing number of “Peregrine” will not lead to a reduction in commuter trains

The length of the CSM will be about 770 km on the highway will be organized stops every 50-70 km from Moscow to Kazan high-speed rail will be 3.5 hours, against the current 14 hours. As earlier told reporters the first Vice-President Russian Railways Alexander Misharin, for the design of high speed railway in 2016 pledged 5 billion rubles. The total cost for the design contract is 20 billion roubles without VAT and the cost of building HSR – 1,068 trillion rubles.

The site “Moscow – Kazan” in the future can become part of the railway trunk “Moscow – Beijing” and the project “silk road” that will link China with Europe and the Middle East.