KIEV, December 18./TASS/. A moratorium on payment of debt to Russia to $3 billion, announced Friday the government of Ukraine, effective from December 20, 2015. This is stated in the decree of the Cabinet of Ministers. 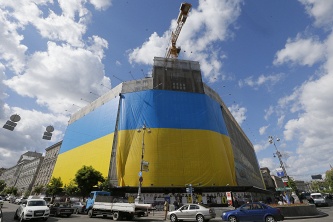 According to the Cabinet of Ministers, on the credit of the state enterprise “Design Bureau “southern” named after N. K. Yangelya”, which was attracted under the state guarantee in 2011 maturing in 2018, a moratorium is introduced on may 19, 2016.

Earlier in the meeting of the Cabinet of Ministers Prime Minister of Ukraine Arseniy Yatsenyuk announced the introduction of a moratorium on payments in favor of Russia.

Due to the fact that Russia has refused, despite our attempts to sign the restructuring agreement and to accept our proposals, the Cabinet of Ministers introduces a moratorium on the payment of Russian debt in the amount of $3 billion

Yatsenyuk also noted that the Ukrainian government is introducing a moratorium on the payment of $507 million, which has two Ukrainian companies Yuzhnoye and “Ukravtodor” to Russian banks.

“From today, all payments are suspended until the adoption of our proposals or judicial decisions,” he added.

In December 2013, the presidents of Russia and Ukraine Vladimir Putin and Victor Yanukovych have agreed that Moscow will give Kiev a loan of $15 billion through the placement of Ukrainian securities. Under this program, bonds for 3 billion dollars were posted on the Irish stock exchange on 20 December 2013 and bought by Russia at the expense of the national welfare Fund.

Later Ukraine tried to challenge the status of the loan, and adapt to commercial loans subject to restructuring. Russia with such an approach is not agreed.

In November 2015 the President of Russia Vladimir Putin declared about the readiness to restructure the debt of Ukraine if the US, the EU or large international financial institution will give Russia the guarantees. However, assurances had been received.

20 December, Kiev was supposed to fully repay the loan before Moscow, if he do not, within 10 days after the onset of this period, Russia will go to court.