MOSCOW, December 19. The Chairman of the party “Yabloko” Sergei Mitrokhin believes that during his leadership the situation in the organization has improved. He stated this at the annual Congress, which may change the party leader. 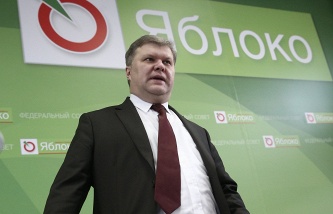 Sergei Mitrokhin to leave the post of Chairman of Yabloko

The Chairman of the party recalled that “it is possible to obtain a number of advantages”, in particular, to obtain, along with the parliamentary parties, government funding and the opportunity to participate in the elections without collecting signatures. According to Mitrokhin, the results of the regional elections “are improving from year to year.” “Today the electoral presence of the party covers 21 regions, of course, first of all, this municipal Council, at the moment we have 173 people,” – said the head of “Apple”.

The Congress will discuss the amendments to the articles of Association in case of adoption of which the party may change the Chairman. On the eve of the Congress of the political Committee of Yabloko proposed to prescribe in the Charter party of a prohibition for the same person to take the presidency two terms in a row. The introduction to the Charter of this amendment would mean that Sergei Mitrokhin, head of Yabloko since 2008, will no longer be able to claim the presidency.

If the amendment be accepted, will not be eligible for the post and Grigory Yavlinsky, who headed Apple since the early 1990-ies to 2008. He does not exclude his nomination for the presidency, if the Congress will not accept the amendment limiting the tenure.

According to the site “Apple”, among the other candidates for the presidency – without mandate of the former member of the legislative Assembly of the Pskov region Lev Shlosberg, a former state Duma Deputy Sergei Ivanenko, Commissioner for human rights in St. Petersburg Alexander Shishlov.

Yabloko is one of Russia’s oldest parties. During the Congress, the Mitrokhin has informed that its population is now 28 million people. The party participated in all parliamentary elections and was represented in the state Duma of the first, second and third convocations. At the elections in 2011 the party won 3,43% and not passed in the Duma.