Alarm signals began in may of 2015, when the Park of lions “Taigan” in Belogorsk and the Skazka zoo in Yalta tried to close for two months for quarantine, said the Director of the menageries Oleg Zubkov. 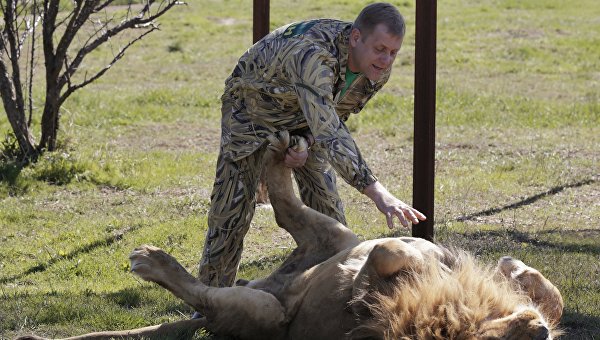 SIMFEROPOL, 21 Dec. The Director of the Park of lions “Taigan” in Belogorsk and Skazka zoo in Yalta Oleg Zubkov said that the zoos are under the threat of a hostile takeover.

More than a week ago he announced that closes its parks in Crimea in protest. His decision Zubkov has explained, “unprecedented pressure” on his militiamen and personally to the Prosecutor of the Crimea Natalia Polonskaya.

The scandal has been publicly reported after in the zoo “fairy Tale” began to die rare Bengal tigers-albinos. Zubkov tied their death with hypothermia, as in the menagerie failed alternator, and the new authorities it is not provided. While Poklonskaya said the cubs died of intestinal diseases and urged Zubkov to create in their private zoos necessary conditions for keeping animals, and “not to blame all their troubles”.

“Given how the pressure of continuing the destruction of my objects, namely, the Yalta zoo “Skazka” and the Park of lions “Taigan”, personally me as a businessman, I’m sure this is nothing but a hostile takeover of my companies,” said Zubkov to journalists in Simferopol.

According to him, the alarm signals began in may of this year, when zoos tried to close for two months for quarantine. Zubkov stressed that was going to take the thrown bears in the Moscow region, but the Crimean veterinary Department said that the bears will not be published in its parks in connection with their closing.

“The fact that reads from itdepartment of the Crimea that my parks are being closed, what I don’t accept and can’t accept animals, it is a signal,” he said.

He previously announced that he has received offers to transport animals in the Republic of Tatarstan or Krasnodar region, but also abroad — in Iran, Spain, Portugal.

In turn, the head of the Crimea Sergey Aksenov called blackmail, the decision of the founder and the Director of zoos “Taigan” and “fairy Tale” Zubkov about the closing and possible relocation, noting that the Republic’s authorities do not aim to cease their activities.