MOSCOW, December 21. The Chairman of the state Duma Sergey Naryshkin believes that “the threat of the collapse of the EU real”. This opinion he expressed in an article published Monday in “news”. “It’s hard to say, will exist whether the EU in this form for another ten years,” he writes, Recalling that “such a tough forecast was made recently by a speaker of the European Parliament Martin Schulz”.

“It seems that recent events strongly “knocked down” evrointegratorov and gave confidence to the skeptics, which in the West until recently were considered outcasts,” – said Naryshkin. 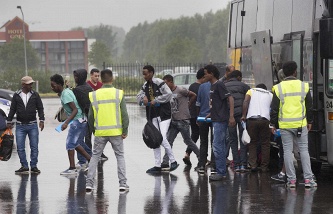 Media: the Netherlands is considering creating a mini-Schengen

In his view, “Europe has simultaneously fallen, and the problems of the Schengen area, and a convincing election results in Greece, France, Poland, national-oriented forces, not to mention disturbing for the EU referendums”. One of them took place in Denmark, “where the citizens refused to give the EU its sovereign rights in the area of security and justice, the other is prepared in 2016 in the UK, whose authorities have already stated their “ultimatum” to the EU.

The reason for such trends, said the speaker, “that is bursting at the seams the very concept of the European Union”.

“Faced with new challenges, – said Naryshkin, – it has shown to be ineffective, and the European bureaucracy is powerless and unwieldy in the face of a migration crisis and the growth of the terrorist threat”. But all this was “just the result of deeper problems and made mistakes before”. Great idea of greater Europe, according to the speaker, “has been emasculated, because without normal, equal and respectful relations between States lasting Alliance possible.”

“We can’t forget about reputational losses that you have suffered the leaders of the European Union from Ukrainian crisis – says Naryshkin. – How much blame Russia, a coup d’etat in Kiev, accomplished contrary to the Constitution, without the support of the West would not have been possible”.

All this has led to the fact that “politicians with other views already “breathe in a nape” to the leaders of the EU and break its unity, just voicing the obvious that people understand things.” At the Moscow inter-parliamentary forum in October, cites the example of Naryshkin, “the MEP Nadine Morano openly resented delivered in the European Parliament “on stream” anti-resolutions”. “I imagine the French people and as his representative should advocate for dialogue with the country, which I consider our partner, ally and historic friend,” she said.

“The approaches of Brussels (and in charge of this entire project of Washington) to modern Russia are among the strategic miscalculations,” said the speaker of the state Duma. “The idea is to talk to us in the language of the illegal sanctions is illogical and obviously embarrassing for European diplomacy, says Naryshkin. – You enter and they are extended on behalf of dozens of peoples, which consent not asked, although the burden of the economic impact to carry them again”. “The way to carry out such decisions without discussion clearly characterizes the level of democracy in the EU. Hence the news about a revolt against Italian colleagues “technical” extension of the so-called sanctions,” – said the Chairman of the state Duma.