Bilateral meetings with the Russian leader will take place at the meetings of the collective security Council of the CSTO and Supreme Eurasian economic Council. 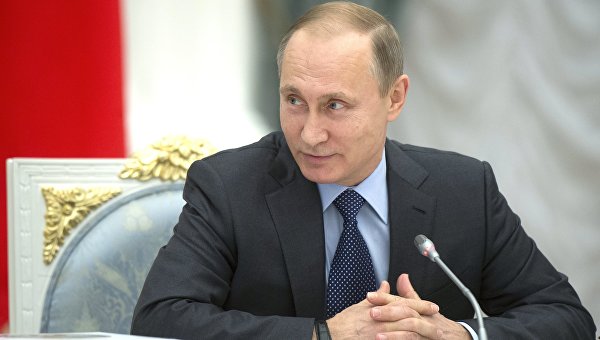 MOSCOW, 21 Dec. The President of Russia Vladimir Putin will hold on the sidelines of summits of the CSTO and Supreme Eurasian economic Council (SEEC) on Monday bilateral meetings with his counterparts from Kazakhstan and Kyrgyzstan Nursultan Nazarbayev and Almazbek Atambayev. A separate conversation with President of Belarus Alexander Lukashenko, according to aide to the Russian President Yuri Ushakov, it is planned.

Meeting of the collective security Council of the CSTO and Supreme Eurasian economic Council will be held on Monday in Moscow.

Ushakov recalled that the talks with the head of Belarus took place last week, and reported that a single contact in the framework of the summits are planned. According to the assistant of the Russian President, Putin and Lukashenko discussed the possibility of granting credit to Minsk from the funds of the EEU, but any decisions yet, and the discussion will continue. At the same time, he noted that the priority issues of the summits this theme does not appear, but did not rule out that she may be raised during informal discussion.

“All (Saturday — ed.) begins with conversations of our President with the President of Kazakhstan Nazarbayev”, — said Ushakov reporters.

This will be the fourteenth in the conversation between the two leaders this year. According to Ushakov, Putin and Nazarbayev plan to discuss the situation in Syria and Ukraine, trade and economic relations between Moscow and Astana.

“It is expected that during the talks the presidents of Russia and Kazakhstan will discuss a number of topical issues of regional and international agenda. In particular, will exchange opinions about the interaction between Moscow and Astana in the framework of the CSTO and the Eurasian economic Union affect the situation in Syria and Ukraine”, — he noted.

The presidents also touched upon issues of strengthening of trade and economic cooperation.

A significant portion of trade and economic cooperation account for the fuel and energy sector. Mutual energy supplies. Russia is the main transit country of Kazakhstan oil to external markets. In the gas sector, the interaction is carried out in the framework of long-term intergovernmental agreement of 28 November 2001. Since 2002 the joint venture “KazRosGas” gas supplies from the Karachaganak field at the Orenburg gas processing plant.

Expanded cooperation in high-tech industries, in particular in the nuclear industry. Preparing an intergovernmental agreement on cooperation in the construction of a nuclear power plant of Russian design in the territory of Kazakhstan, said Ushakov. Since 2002 a project of joint uranium mining in Kazakhstan. The complex program of cooperation in the field of use of atomic energy for peaceful purposes. In accordance with the intergovernmental agreement of 10 may 2007 on the territory of the Russian Federation is created and operates an international center for uranium enrichment.

The possibilities of joint ventures, attraction of investments (technologies) followed by access to the markets of third countries in the metallurgical, mining, chemical, light, medical, woodworking, engineering industry.

Russia leases located in Kazakhstan, the Baikonur complex. In 2004, the term of the lease was extended until 2050.

“We have scheduled another conversation with President of Kyrgyzstan Atambaev”, — said Ushakov.

This is the seventh meeting of the Russian President with his Kyrgyz colleague. The Central theme, is expected to become the trade and economic cooperation in the context of the accession of Kyrgyzstan on August 12 of this year to the Eurasian economic Union. According to Ushakov, during the conversation, “will be discussed certain aspects of Russian support for adaptation of Kyrgyzstan to the norms of the EAEU”.

Within implementation of the bilateral intergovernmental agreement on development of economic cooperation in conditions of Eurasian economic integration of Russia gratuitously allocates Kyrgyzstan $ 200 million. Entered into force an intergovernmental agreement for Russian-Kyrgyz development Fund, signed in Bishkek in November last year. Along with the integration project Russia is providing large-scale financial assistance to the Kyrgyz economy. In 2014, grant assistance to the Republic amounted to $ 90 million. Just since 2010, was granted $ 300 million.

In addition, Putin and Atambayev will discuss cooperation between the two countries in the energy sphere.

“The leaders of Russia and Kyrgyzstan discussed the theme of cooperation in the energy sphere”, — said the assistant to the President of the Russian Federation.

In Kyrgyzstan is working “Gazprom”, which implements the modernization of the gas transmission and distribution networks, the exploration of a number of hydrocarbon deposits. With the beginning of the year is implemented, the General scheme for gas supply and gasification of Kyrgyzstan until 2030, which envisages bringing gas from the current 26% to 70%.

Russia is the main trading partner of Kyrgyzstan with its share in external trade turnover more than 27%. Due to the volatility of the currency markets for the first nine months of this year the volume of bilateral trade flows has decreased 22.7% to $ 1 billion. In 2014 it stood at 1.8 billion dollars.