The first half of 2016 for the Russian grain market promises to be successful: in spite of the export duty for wheat, while there is every reason to expect a high grain exports from Russia – this will contribute to a fairly high harvest. 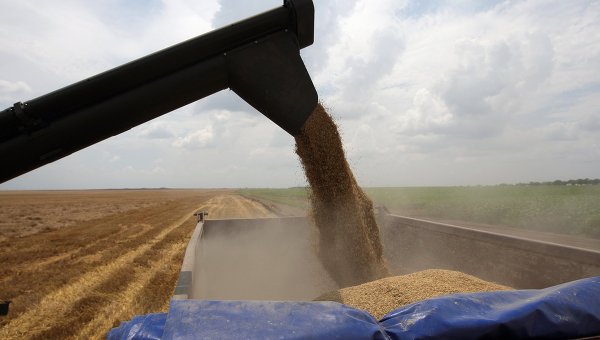 MOSCOW, 21 Dec. Anton Meshcheryakov, Irina Andreeva. The outgoing year for Russian grain market was more successful than unsuccessful, according to polled analysts: despite export restrictions, stagnant world prices and a negative in geopolitics, Russia collects high yields of grain and increases the supply of wheat abroad.

The first half of 2016 also promises to be successful: in spite of the export duty for wheat, while there is every reason to expect a high grain exports from Russia — this will contribute to a fairly high harvest. However, a negative factor may become low world prices for grain.

The new year may also bring Russia into new markets of grain — for example, in Chinese, although analysts still doubt the prospects of this direction. At the same time, opening new markets, domestic grain hardly will lose the old: despite an uneasy relationship with Turkey and Egypt, these countries are unlikely to reduce purchases of Russian wheat.

In General, the experts called 2015 more of a success for the grain market than unsuccessful, but they agree that the year was difficult. On the one hand, in the 2014-2015 agricultural year Russia has collected one of the largest grain harvests in history — 105.3 million tonnes. This, in turn, allowed to export record volumes of grain — more than 30 million tons.

The second half of the year — and the first half of the 2015-2016 marketing year — also was quite nice. The expert of the Analytical center under the government of the Russian Federation Elena Razumova indicates that the grain harvest during this period was also good. On Tuesday, the head of the Department of crop production Ministry of agriculture of Russia Peter chekmaryov said that grain production in Russia reached 103.4 million tons in net weight.

Earlier, first Deputy head of the Ministry Yevgeny Gromyko said that the grain harvest in Russia in 2015 in the net weight can reach 102 million tons. The export potential of grain is estimated by the agriculture Ministry at the level of 30 million tons. According to the FCS, by 9 December Russia exported 17.8 million tonnes of grain, including 13.4 million tons of wheat.

A year of struggle

However, if in grain production during the calendar year the benefits were greater than the minuses, for exporters, the situation was not so rosy. “Last season was quite successful but could be even more successful if it had not imposed the export duty,” — said the President of the Russian grain Union (RGU) Arkady Zlochevsky.

“If we are talking about calendar year, then the two duties in a row – this is not good. There were challenges for exporters, not the most favorable. The export duty is the damage to grain farming in General, the fee takes away the profit of agricultural producers”, — the General Director of company “Prozerno” Vladimir Petrichenko.

“One duty, the second duty, then the modification of the fee – it was a struggle, was a year of struggle,” he concludes.

In turn, the Deputy head of strategic marketing Department of the company “Rusagrotrans” Igor Pavensky noted that grain exporters were also negatively impacted by the fall in world grain prices. “They were forced to export at relatively high domestic prices, and the yield was at a minimum due to the return of value added tax,” — said the expert.

The first half of 2016, i.e. the end of the current agricultural season is estimated by analysts with moderate optimism. “If nothing changes and the mechanism of collection of duties is maintained, for wheat we will exceed last year’s export volumes,” says Pawinski.

According to his estimates, the exports of grain in the 2015-2016 marketing year may reach 31.5 million tons, including 23 million tonnes of wheat. “The volume of exports is likely to remain at last year’s levels,” — said in turn Razumova from the Analytical center under the government.

However, the General Director of “Prozerno” not the most optimistic expectations for 2016. “We are in a price stagnation in the world market. I don’t know what will be the course, so if we talk about the global market – there is price stagnation,” he said Petrichenko. He added that if next year the exchange rate will be stable, the Russian market grain prices also will be stable.

“Price stagnation for all manufacturers is harm. Despite the fact that the cost of the means of production will grow — and this is quite obvious, we all understand”, — the analyst specifies. He drew attention to the fact that, in particular, from January, will have increased the tariff for cargo railway transportation. “Like it or not, but the production costs will grow”, — says Petrichenko.

On the Eastern front

The new year can bring for Russian companies new opportunities in an easterly direction. For example, now actively discussing the start of deliveries of grain from Russia to China. December 17, Russia and China signed protocols on phytosanitary requirements for wheat, maize, rice, soybean and rapeseeds exported from Russia to China. In fact, it means the opening of the Chinese market for the supply of these crops from Russia.

China has allowed deliveries of wheat, grown in the Altai and Krasnoyarsk territories, as well as in the Novosibirsk and Omsk regions. Corn, soy, rice and canola should be grown on the territory of Khabarovsk, Transbaikalian and seaside edges, the Amur region and the Jewish Autonomous region. The Rosselkhoznadzor expects the talks with the business about the supply of grain in China will begin in the coming days.

In addition, at the end of November Vietnam had turned Russia into a temporary register of the countries-exporters of grain for the period to 31 March 2016. And in September 2015 the interest in supplies of Russian grain to Mongolia said the Deputy head of the Ministry of agriculture of the Russian Federation Sergey Levin.

At the same time analysts are skeptical about the prospects of grain exports from Russia to Asian markets. “I don’t really believe in opening up the market of China, is a political decision: now the party and the Chinese government will not give the command phytosanitary services, they won’t discover anything and will put obstacles”, — said Zlochevsky, the head of the RGU.

“Rapid breakthrough in the Chinese front to wait until naive. As for our progress in Southeast Asia, it is also a difficult market”, — agrees with him Director General of “Prozerno”.

Razumova from the Analytical center under the government, in turn, notes that for access to Asian grain markets in Russia, first of all, there are no commercial contracts in this field, and secondly, not developed infrastructure for the supply of terminals, wagons, ports. “In addition, it has to compete with long grain Asian partner for Australia,” she adds.

The lack of connections with local companies is also impeded by the mass exit of Russian grain to the markets of the Middle East — e.g. Iran. “Besides, now there is a very high level of stocks of grain, the competition is also very high, therefore, to occupy new niches harder,” continues the expert of the Analytical center.

Another limitation of the growth of trade with countries in the Middle East, she said, is to increase its own production of cereals in this region. “However, within three to four years if the current volume of the gross grain harvest, the consolidation of the markets of the Middle East — very likely development of the sector,” indicates the analyst.

However, if Russia will not be able to discover new grain markets, at least not lose verified buyers of our grain — Egypt and Turkey. The irony of fate, with the main importers of Russian wheat were related, perhaps the main foreign news 2015.

At the end of October there was the largest disaster in the history of Russian and Soviet aviation: the Airbus A321 of airline “Kogalymavia”, which was flying from Sharm El Sheikh to St Petersburg, crashed in the Sinai. Onboard there were 217 passengers and seven crew members, most of them Russians. They all died.

A little less than a month later, the Turkish F-16 shot down in Syria, the Russian bomber su-24. The Russian President Vladimir Putin called it a “stab in the back” by the accomplices of terrorists. After the incident, the head of the Russian Federation signed a decree on measures to ensure national security and on the special economic measures against Turkey.

After these events have repeatedly raised concerns about reduced supplies of grain from Russia to Egypt and Turkey, which rank first and second largest buyer of Russian wheat. However, experts indicate that: the cooling of relations with these countries has not affected the volume of grain exports from Russia.

“The geopolitical situation of Egypt and Turkey, on the supply of grain, by and large, not affected. The little things there is a negative, but overall transfers continue in operation”, — says the President of the RGU. “The likelihood of significant policy changes in Turkey and Egypt in respect of purchases of Russian grain is extremely unlikely” — I agree with him Razumova.

In particular, for Turkey the issue with the purchase of Russian wheat is not only favorable price, but also in required for Turkish flour millers as a grain: a similar replacement of the Russian grain are hard to find. “For Egypt the issue price is more important, and while including freight (delivery) Russia has significant advantages,” continues the analyst.

“So in the medium term the role of these export markets, if we do not take into account possible policy decisions on the grain trade will remain key,” she concludes.