MOSCOW, December 21. The Ministry does not expect deficit and reduce the quality of the products after the New year, when will enter into force the embargo on the export of some Turkish products. This opinion was expressed by state Secretary, Deputy Minister of industry and trade Viktor Evtukhov. He reminded that Russia already has experience supply constraints from other countries and not lost in the variety of goods. 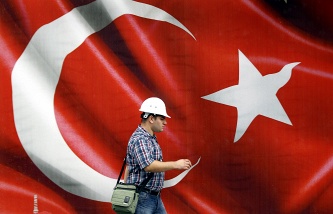 Turkish Minister: the crisis in relations between Turkey and the Russian Federation can be resolved by March

“I suppose the introduction of a food embargo with Turkey will lead to the rotation of suppliers, and the geography of imported fresh to some extent will change. But it will not affect the range and availability of familiar products. Baptism of fire Russian retail has already passed a year and a half ago (after the embargo on imports of products from the EU – approx. ed.). Empty shelves, shortages, reducing the quality we have not seen and will not see after the New year,” said Evtukhov.

According to him, the situation with the ban on food imports from the EU was for the representatives of Russian retail heavier. “Suddenly terminated the partnerships fostered over the years. However, as shown, a Holy place is never empty, to the domestic market reached new suppliers”, – said the Deputy Minister.

He added that currently the Ministry had not received any signals from the retail sector about the lack of products, the supply of which Turkey occupied a significant portion (tomatoes, cucumbers, grapes, citrus). In addition, the network was given the time lag for re-supply, recalled the Deputy head of the Ministry of industry and trade, restrictions on the import of products from Turkey are introduced only on 1 January.

Responding to a question about rising prices, Evtukhov noted that the Ministry of industry and trade monitoring “traditionally” captures the growth in the prices of fresh fruits and vegetables, but this seasonal price fluctuations. “In addition, the prices are quite sensitive to any fluctuations of the ruble, despite the fact that the import in retail accounts for only a quarter of the market”, – said the Deputy Minister.

As previously reported, the government of the Russian Federation from January 1, 2016, prohibit the importation into Russia of a number of food products from Turkey. So, Turkey will not be able to export strawberries, oranges, tangerines, grapes, apples, pears, apricots, peaches and nectarines, plums, strawberries, and strawberries. In a positive list and also got vegetables: tomatoes, cucumbers, cauliflower and broccoli, onion, frozen parts of carcasses and offal of turkeys and chickens. Is prohibited by Turkish cloves and salt.

According to Rosstat, in November 2015, the food in Russia in comparison with October has risen on 1,2% in annual terms – by 16.3%. In November among the observed types of fruits and vegetables significantly increased the prices of cucumbers and tomatoes fresh – 1.7 times and 1.3 times, respectively, the cabbage fresh – 9.9%. However, 6.3% of the lemons fell, by 3.4% carrot, 1.2 to 1.9% – beets, apples and pears.