One of the Central themes for discussion the leaders of the CSTO countries will be confronting terrorism and extremism, the results will be summarized first year of operation of the Eurasian economic Union. 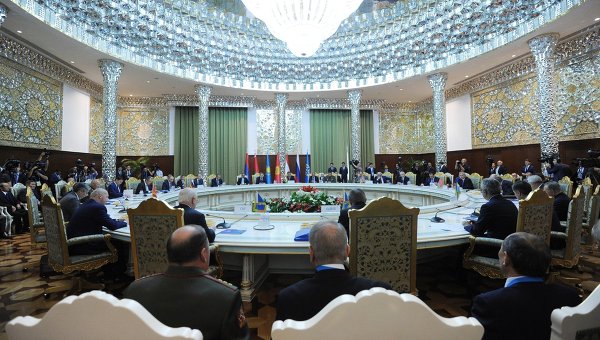 MOSCOW, 21 Dec. The summits of the Organization of collective security Treaty (CSTO) and the Supreme Eurasian economic Council (SEEC) will be held on Monday in Moscow.

The CSTO was established in 2002 and now it includes six States: Armenia, Belarus, Kazakhstan, Kyrgyzstan, Russia and Tajikistan. Previously a member of the organization was, and Uzbekistan, but suspended its participation in December 2012.

The Eurasian economic Union created in 2014 on the basis of the Customs Union of Russia, Kazakhstan and Belarus. In addition, the EEU now includes Armenia and Kyrgyzstan. The Union is engaged in regional economic integration and operates on the basis of norms and WTO principles. In the framework provide for the free movement of goods, services, capital and labour, carried out coordinated policy in key sectors of the economy.

The first Monday will host a summit of the CSTO. According to the Russian presidential aide Yuri Ushakov, Moscow session will be unscheduled, it is convened on the initiative of the presidency of the organization in Armenia, which was proposed to combine this event with a meeting of the Supreme Eurasian economic Council

One of the Central themes for discussion the leaders of the CSTO countries will be confronting terrorism and extremism.

“It is planned to adopt a statement on terrorism. It also will reflect the common approaches of member countries to this threat,” — said Ushakov.

The new Secretary General of the CSTO

In addition, the presidents will agree on a number of documents relating to current activities of the organization, and to solve the question of who will be the new Secretary General of the CSTO. Now this post is representative of Russia Nikolay Bordyuzha.

“The final decision for the leaders on Monday. Several options are being discussed”, — said Ushakov.

He reminded that now the post of Secretary General of the organization will be rotational. “Rotation is considered on the basis of the Russian alphabet, it is therefore logical that Armenia will become a General Secretary in the organization. But this issue is still being discussed”, — said the assistant to the President of the Russian Federation.

It is possible that at the meeting of the leaders of the CSTO will also raised the issue of deterioration of relations of Russia and Turkey, which occurred after Turkish air force shot down in the skies over Syria, the Russian bomber su-24. Some members of the organization of long-standing close relations with Ankara and, of course, they are interested in this question.

“I do not exclude that Turkish subject, and at another meeting in varying degrees, will be discussed, as this topic is very important, of course. I assume that leaders of other countries will be interested in our position, and to clarify some details, and their views will be judged in this context”, — said Ushakov.

Answering the question whether Russia to speak at the meetings of the initiative for joint action against Turkey in the field of Economics, the Russian presidential aide stressed that “the leaders will discuss this issue”.

“I’m just saying that a Turkish theme, probably because it is now very popular, of course… I think it is inevitable, it will be discussed, especially the representatives of several countries had after the incident with our bomber contacts with the Turks” — said Ushakov, adding that it is difficult to predict how the discussion will go.

After lunch on Monday in Moscow will be a meeting of the Supreme Eurasian economic Council. The leaders of the EEU member countries will sum up some results of work of the Union.

“We will announce the results of the first year of work of the Eurasian economic Union and the issues related to further development and integration of promising issues,” said Ushakov.

Is on the agenda and more pressing matters. “I will mention the issues related to minimization of negative consequences for the countries-members of the Eurasian economic Union to start functioning from January 1, 16 year free trade zone Ukraine — EU. The Russian side will provide partners to work together to take protective measures”, — said the assistant to the President of the Russian Federation.

In connection with the planned beginning of work of the Ukrainian-European FTA Putin on Wednesday signed a decree suspending Russia from 1 January 2016 to the Treaty on the free trade zone of the CIS in Ukraine. First Deputy head of the Russian Ministry of economic development Alexei Likhachev said that this means the introduction of Ukraine duties on most favoured nation treatment.

How to protect sanctions

Another question, who would like to raise with Russia in the prevention of re-export through the territory of the EEU member countries of products prohibited for import in the Russian Federation. Speech in primarily talking about food products. In the past year in connection with the situation in Ukraine, the EU and the US imposed sanctions against entire sectors of the Russian economy. In response, Russia has restricted food imports from U.S., EU, Canada, Australia and Norway. However, according to some information, such goods continue to arrive in Russia, for example, through Belarus.

“The question will be raised about some of the problems associated with the use of “black schemes” to bypass Russian sanctions in response to sanctions policy of the USA, EU and some other countries,” — said in this regard, Ushakov.

It is not excluded that at the summit it comes to granting a loan to Minsk the Eurasian Fund for stabilization and development (AFSR). In March, Belarus asked ESR for a loan of $ 3 billion to support the stabilization program of the government and the national Bank for 2015-2017. Then Minsk was reduced the desired amount to 2 billion dollars.

Decisions on the allocation of funds has not been made yet. Parallel Minsk is discussing with the International monetary Fund (IMF) loan of $ 3 billion in advanced funding under 2,28% over ten years.

In Moscow say they are willing to discuss this topic. “We have as priority issues (at the summit – ed.) it does not appear, but if someone picked up during the informal discussion, then, of course, this theme will be affected,” said Ushakov.

He recalled that at a recent meeting in Moscow, Putin and Belarusian President Lukashenka has dealt with this issue.

The presidents also will discuss the prospects of cooperation between the Eurasian economic Union (EEU) with other countries and integration associations.

It is also planned to touch upon the subject of deepening trade and economic cooperation with China, including the pair of the EAEC project with China “the Economic belt of New silk road”. A statement on the matter was taken in may of this year following the results of negotiations of Putin with President of China XI Jinping.

According to the President of the Russian Federation, the implementation of this project will enable to expand a number of bottlenecks in transport infrastructure, regulation of cross-border movement of goods and services; will give an impetus to the integration of APEC economies.

The Minister for trade of the EEC Alexey Slepnev said earlier that the first round of negotiations between the EEC and China in the pairing of the EEU countries in the zone “silk road” will take place in early 2016.

“The heads of state will approve specific nominations from each country for the positions of members of the Board and the allocation of powers among them,” — said Ushakov.

He also reminded about the decision to change the membership of the Board. “The number of representatives from each country will be reduced from three to two. This is done in order to avoid erosion of the powers of the members and the growth of bureaucracy after joining the Union, Armenia and Kyrgyzstan”, — said Ushakov.