SAMARA, December 22. “AvtoVAZ” by the end of 2015 will reduce production of cars by 14% to 470 thousand compared with 2014. This was stated on Tuesday, the President of “AVTOVAZ” Bo Andersson, quoted by the press service of the Russian engineering Union. 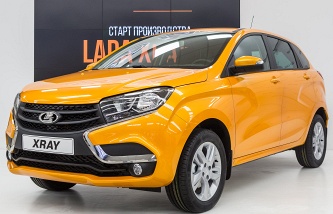 “This year we will produce almost 470 thousand cars. This is 14% fewer cars than last year. – The share of Togliatti auto giant in 2015, accounting for 36% of all produced passenger cars, up from 30% a year earlier. Next year we anticipate approximately the same number – 36%”, – said the head of AVTOVAZ, speaking on held in Moscow the meeting of the Committee of the Union of machine builders of Russia on development of cooperation and localization of production in the automotive industry.

As explained in the press center of the automobile, the figure of 470 includes thousands of cars like the Lada cars, and cars produced by “AVTOVAZ” for the Alliance “Renault-Nissan”.

Andersson also emphasized that the automobile market in 2015 decreased by 35%. Deputy Minister of industry and trade of the Russian Federation Alexander Morozov, speaking at the meeting, noted that the situation in the domestic automotive industry remains intense. “We managed to stabilize the situation by implementing a large-scale program of state support demand in the amount of more than 43 billion rubles, which allowed us to implement more than 500 thousand cars”, – the press service cites the words of Morozov.

The main objective for 2016 is to create conditions for growth to get the industry, which will be sufficiently competent and competitive. This is to be achieved at the expense of key programs to support the automotive industry.

“Our task, in my opinion, it is highly ambitious, given the dire macroeconomic uncertainty, but we believe that there are prerequisites to increase the efficiency of the industry as a whole, running the mechanisms that we invent” – said Morozov.

According to Andersson, in the nearest plans – increase the localization of the car Lada Vesta from the current 71 to 85%. By Lada Xray is expected to achieve localization in 75%.

“Lada Vesta is a huge work from the team. Today we made 4 220 thousand cars. Now we are able to produce 150 cars a day. We have 250 suppliers, and only two of them create problems for us,” said Andersson.

It is planned that in the course of further work of the Committee Souzmash Russia will be developed the basic concept for the development of the automotive industry, including the road map and the relevant package of laws and regulations.