MOSCOW, December 22. Up to $500 million annually gets banned in the Russian Federation terrorist group “Islamic state” (IG) from smuggling Afghan heroin. About it on Tuesday has informed journalists the head of Federal drug control service of Russia Viktor Ivanov.

“The ISIL (the former name of the organization) actively involved in the drug trade. According to our data, the amount of revenue can range from $200 to $500 million annually,” he said.

“Criminal gangs who have joined ISIL, are involved most actively in the transit of drugs, because it gives a huge profit. Entry price the territory controlled by ISIS, and the output is different. This difference, Delta, and still the criminal gangs that are up in arms fighting against humanity,” – said Ivanov.

Ivanov said that about 50 tons of drugs annually transit through Turkey to EU countries. 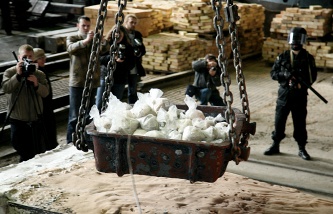 FSKN: the strength of the Islamic state group has quadrupled in size because of the increase in drug trafficking

“The traditional route of drug supply in Europe is about 50 tons of heroin through Turkey into the Balkans and then distributists in the EU. Therefore, the flow through Turkey is the most dense. There was also a second thread that follows through Turkey and Iraq. And this thread is on par with the Balkan route. Thus, the volume of supply of heroin to Europe increase,” he said.

“Afghanistan occupies a monopoly position on the global market for the production of heroin. The whole mass of the prepared drug is drawn in distant markets, and to Russia, and people’s Republic of China, and the EU. In this case, the routes formed are quite stable along the way these routes are overgrown by organized criminal groups, many of them branched. I think grouping this sort of self-identify, come up with different flags,” added the Minister.