MOSCOW, December 22. The Federal road Fund for the first month of operation of the system for the collection of fare trucks on Federal highways “Plato” added 1.5 billion rubles this was announced by the head of Federal road Agency (Rosavtodor) Roman Starovoit on air of TV channel “Russia 24”. 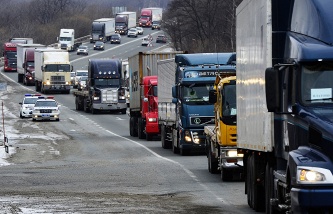 Putin: the devices of the “Plato” should be provided free of charge

FAS: the contribution of the system “Plato” in the growth of prices in Russia will amount to less than 1%

“More than 1.5 billion rubles were received in the first month of work, – said Starovoit. – Can we say, the revolution in approaches to financing road facilities”.

The funds raised will be channeled at Federal and regional road projects, including projects implemented on a public-private partnership.

“We have heard seven regions that offer a list of such projects, – said Starovoit, Is a bridge across the river Chusovaya in the Perm region, taking a detour of Novosibirsk, Khabarovsk, the highway infrastructure projects in Tatarstan”. “A number of regions will be able to receive funds in the next year and to start implementing these projects,” he added.

The head of Federal road Agency also noted that in addition to financing Federal and regional road projects system “Platon” “implicitly solves the problem of whitening of the business of trucking”. “Through toll gates we saw how big the market of “gray” traffic. “It’s a surrogate and transportation of alcohol, and illegally cut down forest illegally produced inert materials”, – said Starovoit.