The last tripartite negotiations on the FTA Kiev and the EU ended inconclusively. Ukraine from January 1, included in a free trade zone with the EU, and Russia to protect its market shall suspend the agreement on free trade zone with Ukraine, and, consequently, imposes customs duties on a number of its products. 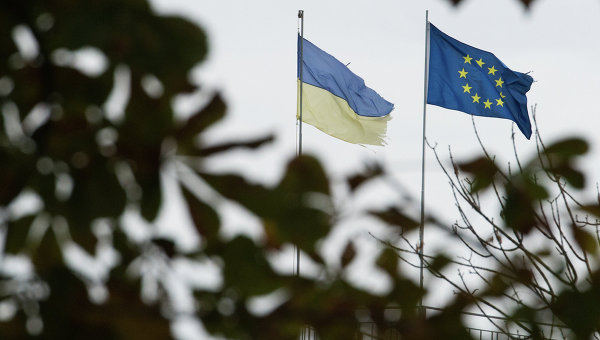 MOSCOW, 22 Dec. Russian authorities on Tuesday showed a highly emotional response to accusations from Ukrainian and European officials in the breakdown of negotiations on free trade zone with Ukraine, which has proved unsuccessful the night before. Responsible for the bad outcome has to assume the policies of Kiev and the EU, Russia is ready to continue attempts to resolve the relations within the triangle EU-Russia-Ukraine, said Tuesday the President of Russia Vladimir Putin.

“I think we still will repeatedly return to these issues. We want to build relationships with our partners and here on this topic (trade regime), with Ukraine want, and with the European Union they want,” said the President of the Russian Federation.

Last Monday in Brussels tripartite negotiations on the FTA Kiev and the EU ended inconclusively. Ukraine from January 1, included in a free trade zone with the EU, and Russia to protect its market shall suspend the agreement on free trade zone with Ukraine, and, consequently, imposes customs duties on a number of its products.

Immediately after the meeting, European Commissioner for trade Cecilia malmström, representing in the negotiations of the EU, said that EU, Ukraine and Russia were close to resolving the issues, but the Russian side has not shown the required flexibility. In addition, she stated that the introduction of duties on Ukrainian goods violates the Minsk agreement. Foreign Minister of Ukraine Pavlo Klimkin, in turn, added that he sees no reason to conduct new rounds of Ministerial meetings.

Putin drew attention to the fact that, when the negotiators from the Russian side specifically and essentially put the controversial issues, the head of the delegation of the European Union stated that “game over”, got up and left the meeting.

“The game is over and gone, but the press release issued today that the Russian delegation broke the negotiations”, — said the Russian leader, adding that “it’s not very European, not at all tolerant”.

First Deputy Prime Minister Igor Shuvalov, was outraged, no less. He called the accusations of Russia in the collapse of the talks deceitful and cynical and promised to disclose the full public access to information about the negotiations.

“We agreed with the Minister of economic development (ed — Alexei Ulyukayev), the media and experts who want to gain full access to this information, we will provide all information: on the status of negotiations with the European Union and Ukraine and the Memorandum, which was prepared by the European Commission and the Russian Federation. You will be able to verify that I said” — said Shuvalov to journalists on Tuesday.

The EU and Kiev on the negotiations with Russia on the impact of full entry into force of the agreement on Association of Ukraine with the European Union only simulated the negotiation process and thus brought him to a standstill, said in a statement published by the Russian foreign Ministry.

The Russian foreign Ministry pointed out that in Brussels, in particular, tried to prove that SA is supposedly no different from the standard and widely spread in world practice free trade agreements, and in Kiev — in every possible way to diminish the significance of Russian-Ukrainian trade and economic ties and paint a “rosy prospects” for the country from fully open internal market for goods and manufacturers from the EU.

“The EU and Ukraine for its intransigence brought the case in the negotiation impasse. This has resulted in an unprecedented problematic situation. To rectify such required an unprecedented decision, however, neither the courage nor the political will nor the diplomatic wisdom for their adoption nor Brussels nor Kiev was not”, — stressed the foreign Ministry.

The Ministry expressed the view that “none of our partners do not even want to negotiate and seek compromises with Russia.” The EU and Ukraine categorically and essentially refused to fix any of the possible results of the negotiations in the form of a legally binding instrument, bringing all your suggestions for continued monitoring of the situation and the creation of new anything, in fact, not authorized working groups.

“The EU was trying to evade its responsibility for what is happening, constantly presenting the case in such a way that solve all the problems must not in trilateral and bilateral Russian-Ukrainian format and feeding yourself as an “impartial arbitrator”. Surely we will hear more this collection of abstracts in the review of Brussels on the results of the barren — their fault — negotiations”, — stated in the message of the foreign Ministry.

Deputy Minister of economic development of Russia Alexey Lihachev has noticed that if anyone violates the Minsk agreements, this is not Russia. “The Minsk agreements spelled out in black and white that should be taken practical steps to ease Russian concerns. A single practical step to ease Russian concerns about these for a year and a half has not been undertaken,” said Likhachev.

“Dramatically increased the flow of invalid certificates of the country of origin from Ukraine… and the competent authorities of Ukraine confirmed that they are not valid… This is a practical concern. And what has been done (to take it off — ed.)”, — outraged the Deputy Minister.

Now Russia is just forced to respond, introducing protective measures on the border with Ukraine. According to the Ministry, damages for entrepreneurs of the Russian Federation of associations of the EU and Ukraine in the short term could reach $ 3.5 billion if Russia did not respond to start the FTA. Ending preferential treatment for Ukraine, Russia, this damage is considerably minimized.

In order to protect his market and producers, Russia will have more work to do. In particular, the Russian President announced the need to develop a system to accurately determine the country of origin of goods, to establish a normal work of the customs authorities.

To help Russia promised partners in the EEU: Belarus and Kazakhstan. The end of the year they will finalize the mechanism of control of goods in transit from the territory of Ukraine, said first Deputy Prime Minister Igor Shuvalov.

“On the issues of transit of Ukrainian goods or goods of the EU, which go transit through the Ukrainian territory to the territory of Belarus and Kazakhstan, between us today consultations were carried out prior… worked out a mechanism that will allow you to fully control the flow of goods from Ukraine through Belarus and Russia to Kazakhstan, with full escort these cargoes and the inability in some way to cover the real consumption on the territory of the Russian Federation under the guise of transit”, — said Shuvalov journalists.