MOSCOW, December 22. The state Duma adopted in the first reading and immediately a whole the draft law that exempted citizens of Belarus from the exams on Russian language, history and basics of Russian legislation for obtaining a residence permit in the Russian Federation. The authors of the initiative were made by the speaker of the state Duma Sergei Naryshkin and the deputies Vladimir Pligin, Leonid Slutsky and Tatiana Moskalkova. 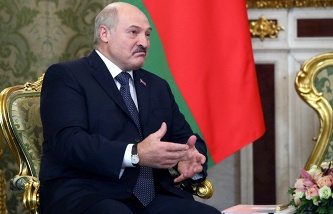 Lukashenko: Belarusians do not need to examine Russian language as “our language”

The draft law exempts citizens of the Union state wishing to obtain a residence permit or a residence permit in Russia, from the necessity of passing a compulsory for other migrants exams – Russian language proficiency, knowledge of history and fundamentals of RF legislation. “The adoption of the draft Federal law will contribute to the further development of integration processes in the territory of the Union state and strengthen the state Union of Russia and Belarus in General”, – stated in the explanatory Memorandum.

The adoption of the draft Federal law will contribute to the further development of integration processes in the territory of the Union state and strengthen the state Union of Russia and Belarus in General, is celebrated in turn in the explanatory Memorandum.

Initially, one of the authors and the head of the profile Committee on constitutional legislation and state construction Vladimir Pligin said that the law on second reading may be introduced an amendment which would distribute the same privileges to citizens of countries where Russian language is recognized by the state. But with repeated discussion of the initiative, he said that this issue will be addressed in a separate bill, which is already under consideration of the government of the Russian Federation. “In this regard, I propose the following approach to adopt the proposed bill in the first reading and in whole”, – said Pligin at the meeting.

The President of Russia Vladimir Putin, speaking at a press conference after negotiations with President of Belarus Alexander Lukashenko, said the decision not to extend to citizens of Belarus the regulations on the knowledge of Russian language, Russian history and legislation of the Russian Federation in obtaining permission for temporary residence in the Russian Federation.

“From 1 January of the current year foreign nationals wishing to live and work in Russia must prove knowledge of Russian language, knowledge of Russian history and fundamentals of legislation. However, given the special nature of Russian-Belarusian relations, we have taken the decision not to extend the validity of these norms on the citizens of Belarus”, – said Putin. The simplification of migration rules of the Russian Federation for the residents of Belarus correspond to the nature of the allied partnership between the two countries, noted the Russian President.