The Russian President reacted positively to many areas and expressed readiness of the authorities to support the industry as a whole. Vladimir Putin decided to build Advisor Internet development, offering the position to Herman Klimenko. 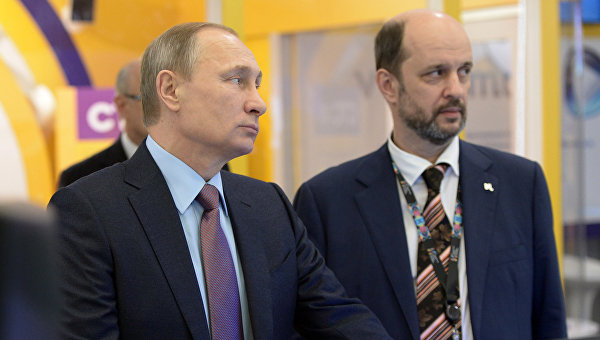 MOSCOW, 23 Dec. Representatives of Russian Internet industry on Tuesday in the first forum “the Internet economy 2015” presented to the President of the Russian Federation Vladimir Putin the main directions of the program of development of the Runet and related industries, which was developed on his own behalf.

The head of state reacted positively to many areas and expressed readiness of the authorities to support the industry as a whole. “The significance and impact of the Internet is constantly growing, you need to involve in this regard, the Internet in General as a driver for development, modernization of the country. Of course, it is true, no one doubts, we are more than willing to help you and to support you in your efforts,” Putin said, addressing participants of the forum.

The President also decided to get an Advisor on the development of the Internet and offered the position the head of the Institute of development Internet (IRI) Herman Klimenko, who promised to accept the offer after consulting with family.

Concrete proposals in eight areas of the program of development of the Runet to develop the IRI, told journalists the Director of the Russian Association for electronic communications (RAEC, co-founder of IRI) Sergey Plugotarenko. He expects that overall direction will be maintained. “Will be supported, as I understand it, the most of all,” he said.

The President of the Russian Federation at the meeting with industry participants, in particular, agreed with the proposal of extending the benefits on insurance premiums for salaries of employees of IT companies, which would expire in 2017. A proposal to the head of state was voiced by the CEO of InfoWatch and co-founder of “Kaspersky Lab” Natalya Kaspersky.

According to her, the industry has proposed to delete from the list of possible recipients of incentives to foreign IT companies, to which the President replied that this should be done so that it does not contradict the WTO rules. The proposal to include in the benefits of the Internet developer also has met with the President’s objections.

According to the Kaspersky, the President also announced at the meeting that supports the proposal to expand the limitation on purchases of foreign SOFTWARE, made for government agencies, state-owned companies. In addition, it was proposed to entrust the Ministry of education to change the curriculum in schools and universities towards a renewed focus on the use of Russian IT solutions. “Large foreign companies have their Department and spread its influence, as a result, students know nothing about the Russian IT-development”, — said Kaspersky.

Kasperskaya has also proposed to regulate the protection of not only personal data but also the so-called personal data of citizens of the Russian Federation. “Let’s. In the fight against terror is absolutely true. Just be careful not to interfere in the private life of citizens”, — said Putin.

To this end, the Kaspersky suggested to create the uniform centre of monitoring response to information threats. According to her, it is also necessary to establish a legal basis for punishment for perpetrators of information attacks.

“With all these suggestions the President agreed and said that the subject is very important and it really need legislation to govern,” she said.

Chapter Mail.ru Group Dmitry Grishin told the forum that he had discussed with the President the issues of development of distance online education in the Russian Federation. “This is actually a good tool to that experience which is now concentrated in the IT sector, spread to the whole territory of the Russian Federation. The President promised to think about what to include in the program of universities online courses from major online players and think about how you can motivate universities to incorporate online courses into their curriculum,” said Grishin.

Managing shareholder of Rambler&co. Alexander Mamut discussed with the President the need to combat pirated content on the Internet. “It is hard to imagine in real life, for example, the sign “stolen stuff shop” or “trading in stolen goods”. However, the Internet is so pervasive, making difficult the effective operation of our colleagues who create quality content with significant resources,” said Mamut.

The head of “Yandex” Arkady Volozh has affected the development of Internet medicine. “It seems to me that there is a lot of conditions, which allow very much change in this area is literally in the next few years,” he said. According to him, in particular, industry experts propose to allow the sale of drugs in the Internet pharmacies to create a single electronic cards of patients and to provide the legislative basis for the work of clinicians using information technology.

According to the head of RAEC Sergei Plugotarenko, within one month after the new year holidays Iran consolidates the suggestions of industry experts and present to the presidential Administration of the Russian Federation and the Ministry of communications, eight memorandums – the number of directions of the developed program of development of a Runet (“Internet+society”, “Internet+city”, “Internet+media”, “Internet+medicine”, “Internet+education”, “Internet sovereignty”, “Internet+Commerce”, “Internet+Finance”).

“The forum is expected of us some memoranda, a set of proposals at the end of each round table (where they discussed the direction of the program – ed.), the specific mechanisms of implementation that we now begin to prepare,” said Plugotarenko.

“For the exact timing can not say, but for us would be a comfortable deadline is approximately one month after the holidays. Will send to the presidential Administration and the Ministry of communications”, — said the head of the RAEC.

He noted that the Memorandum on the eight areas of the program will contain concrete steps on implementation, timelines for the foreseen activities. In addition, there will be a proposal to give Iran the special status of the project office which could carry out this work. The process of implementation of the programme invited to review annually in December at the forum “Internet economy”.

The backbone of the economy

The head of Iran’s German Klimenko at the forum stated that the authorities began to take the Internet industry as one of the most important sectors of the economy.

“I think we have achieved what the government didn’t just pay attention to us, as it was three or four years ago, but became relevant to the industry, which is one of the stem ridges of the economy, because we are everywhere and without us now is extremely difficult,” — said Klimenko, closing the forum.

According to him, the Internet can help in the development of other industries. “I think we just have to come in the industry, to teach them and how did Arkady (Volozh, co-founder of “Yandex” — ed.) with the taxi, to do the same with medicine, education, construction… It is well and good,” — said the head of Iran.

“We will meet opposition, but we know that success in these things will bring forward not only our company, but also will benefit for our country”, he concluded.