Commodity markets are at the lowest level in 17 years, in the course of the year has steadily decreased quotations of basic metals such as aluminum, Nickel and copper, and also zinc and lead. 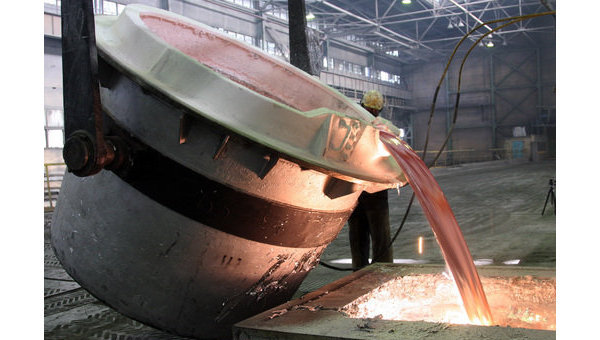 MOSCOW, 23 Dec. Manufacturers of non-ferrous metals in the past year faced with the complication of the already adverse market environment: decline in demand, overproduction and new record prices many eventually led over the threshold of profitability. It is unknown what development can get the situation next year, but industry experts and the companies hope for rapid changes for the better.

In 2015, the industry non-ferrous metallurgy are unable to stay away from negative global trends that have been observed and continue to develop in the economy currently. Being under the influence of rising us dollar and falling commodity prices, during the year has steadily decreased quotations of basic metals such as aluminum, Nickel and copper, and also zinc and lead.

Currently commodities markets in General, along the whole line of products are at the lowest level in 17 years, on average metal prices now correspond to the level of 2008-2009.

Thus a world market of non-ferrous metals in the past year remained in surplus. The main consumers of nonferrous metal enterprises of the construction sector, energy, automotive and mechanical engineering — are unable to provide the necessary level of demand, also suffering from a lack of purchasing power. Iconic role in the development of the adverse scenario was played by the decline in the growth rate of China’s economy, which is one of the largest importers and exporters of the industry.

Meanwhile industry experts and representatives of Russian non-ferrous metals producers still hope for a market recovery in 2016. Relatively positive forecasts are based mainly on adjusting the negative current provisions and expected retirement became unprofitable industries in the world. However, projected performance of the industry though, and should not fall into the abyss next year, but will not be able to reach former heights. Metals prices are likely to remain approximately at the level of 2015.

Aluminum is not in the price

Leaders of consumption are China, North America, EU and India. While China produces and consumes almost half of this metal in the world. It is predicted that global aluminum demand in 2015 will grow by 5-6% to reach approximately 58 million tons. However, since the beginning of 2015 the average cost of one ton of aluminum on the London metal exchange (LME) decreased by approximately 20% to the current range 1420-1480 dollars per ton, a sharp fall in prices began in June.

Aluminum giant UC RUSAL notes that the negative price trend is associated with a larger than expected surplus in the market caused by weaker demand in some developing countries, and increases in production capacity in the middle East, India and China. RUSAL expects that in 2015 the offer of aluminum in the world will exceed the total demand on 373 thousand tons.

According to experts, the amount of aluminum capacity in China has already exceeded 37 million tons, but taking into account the current prices of more than 70% of them unprofitable. In addition, at today’s aluminum prices (including premiums) of about 50% or 14 million tons of production outside China are also unprofitable, on the verge of closure.

According to the forecasts of RUSAL, the LME price and the premium (about $ 90) can’t hold at the current level. The company expects that China will cut its shipments of the metal to the external market. In addition, it is expected that the decrease will be the producers with the highest cost. All this should contribute to a deficit and have a positive impact on prices on the LME in 2016.

Nickel and copper are losing demand

“Since the beginning of the year, the prices of Nickel and copper fell by almost 43% and 29% respectively. There were several factors for the decline: expectations for increase in rates by the fed and the strengthening of oversupply amid slowing Chinese economy”, — analyst BKS Oleg Petropavlovsky. Today’s quotation of Nickel on the LME are at the level of 8600 dollars for ton, copper — $ 4550 per tonne.

The main consumers of Nickel and copper are Europe, China, USA and Japan. The “locomotive” of world demand for Nickel (about 49% of world consumption) and copper (over 40 percent) is China. MMC Norilsk Nickel believes that the surplus in the global Nickel market in 2015 may amount to 39 thousand tons. Next year the company expects a shortage in the amount of 60 thousand tons, in 2017 — about 90 thousand.

Norilsk Nickel notes that, despite the decline in demand and excess production in 2015, at present, the price of Nickel is at an unreasonably low level and does not correspond to fundamental indicators in the industry. According to the company, the fall in prices was caused not only macroeconomic, but also speculative factors.

So, for example, due to the ban by the Chinese government on the opening “short” positions in Chinese securities at the time of the collapse in the local stock market, Chinese investors began to actively use short positions in metals for betting on the slowdown of the Chinese economy. Along with this large global hedge funds in the last 12-18 months actively “shortly” non-ferrous metals in the calculation of the possible reduction of their consumption of the PRC. Well as indices of commodity prices and prices for certain metals (Nickel) show a high inverse correlation with the exchange rate of the dollar in the last growth the first fall.

Norilsk Nickel also points out that at current prices, only 31% of Nickel industry enterprises are profitable. However, 69% of the world losing capacity, 20% of which are high risk, in 2015, is expected to close only 8% of world production of Nickel.

A sharp devaluation of the ruble late last year allowed the Russian non-ferrous metallurgy quickly to obtain the positive effect, because domestic enterprises predominantly (about 75%) export their products. The importance of this factor to the end of the year, as noted by the company, was partly offset by the growth of rouble-denominated costs. However, those financial indicators which were published by Russian enterprises in the course of the year, cannot be called weak.

However, domestic producers, focusing on negative trends and not expecting a quick recovery in prices, began the implementation of additional programs to control costs and reduce the cost of production. The company does not plan to increase production and investment.

Earlier “RUSAL” informed that by the end of 2015 plans to maintain the production of primary aluminum at a level of 3.6 million tonnes on the Russian market, expects to sell about 750 thousand tons. The company will continue to increase the proportion of popular products with high added value. However “RUSAL” has no plans to restart mothballed production and is considering reducing its aluminium capacity of 200 thousand tons per year.

In the domestic market share of the enterprises of Norilsk Nickel accounts for about 96% of the total produced in the country of Nickel, 55% copper. The release of Nickel at the Russian enterprises of MMC in 2015 should be 215-225 thousand tons, copper — 360-370 thousand tons, in 2016 — almost on the same level.

Based on production plans until 2018, the company is not planning significant growth in sales of Nickel. The expected growth of production and sales of copper is associated with changes in the structure of ore mined in Norilsk, as well as the launch of Bystrinsky GOK project with a capacity of about 65 thousand tons of copper per year (MMC is considering a possible sale of up to 50% in this project).

The Outlook for the industry

“The main support factor of non-ferrous metals market in 2016 will be a low base for comparison — the prices of most metals have already reached multi-year lows and a further reduction will be more to wash out of the market unprofitable manufacturers that can not last long, given that the demand for metals now, although not grow, but remains at a high level,” — says the analyst of “RIA Rating” Andrey Kuts.

In his opinion, it is likely that next year the world production of aluminium, copper and Nickel will be reduced and one of the signs of this is the statement of the Chinese manufacturers of the intention to reduce the production of non-ferrous metals in 2016 to reduce the excess on the market.

“If we exclude the possibility of apocalyptic scenarios, in General, we expect the prices of the base metals market in 2016 the average will not differ from the prices of 2015 (+/-10%). With more chances for growth Nickel, the decline of which in recent times was excessively deep, in this connection, it is now unreasonably low prices” — said Kutz.

In turn, the experts of Fitch ratings noted that the market situation today is contradictory, stocks of Nickel on LME continue to fall, however, the value of the metal cannot be restored. They expect the transition of the balance of the Nickel market into deficit next year but not sure it will have a significant impact on the prices.

In addition, keeping the hope of an improvement in demand, companies do not want to close the power first.

Fitch ratings also reported that the negative pressure on the copper market in 2016 will persist. Lower demand from Chinese consumers, the growth potential of the dollar and the bleak investment sentiment, probably, will not properly grow the prices for this metal, despite the slowdown in production, the disruption of world production and the anticipated slight increase in consumption outside China.