MOSCOW, December 24. Almost three-quarters of Russians named President Vladimir Putin politician of the year, on the second place – the Minister of foreign Affairs Sergey Lavrov. Such data was sounded by the General Director of the all-Russia centre of studying of public opinion (VTSIOM) Valery Fedorov.

“Politician of the year for Russians is Vladimir Putin was named by 74% of respondents. Then far behind Sergei Lavrov (13%), Dmitry Medvedev (5%), Sergey Shoigu (5%), Vladimir Zhirinovsky (4%)”, – he told journalists. 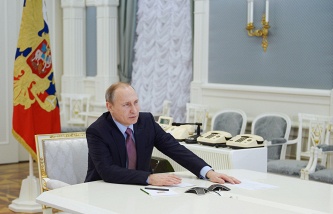 VTSIOM: ultra-high level of approval of Putin kept for a year and a half

Fedorov reported that the leader of the rating of the athletes became the first biathlete Anton Shipulin (6%), the second place skater Evgeni Plushenko (4%), the third athlete Elena Isinbaeva (3%).

In the ranking of musicians is traditionally on the first lines of Philip (6%) and Stas Mikhailov (5%), and the third, according to a survey, first became Dmitri Hvorostovsky (5%). According to Fyodorov, the hardest, the respondents were to choose a writer of the year: the answers for all the persons are well below the statistical error: Daria Dontsova noted 3% of respondents, Zakhar Prilepin – 2%, others – 1% or less.

The initiative Russian opinion poll was conducted on December 19-20, 2015. Interviewed 1600 people in 130 populated localities in 46 regions, territories and republics of Russia. The statistical error does not exceed 3.5%.