Pressure on steel prices had reduced demand for steel for the construction industry, as well as increased exports of cheap steel from China. According to analysts, is expected to fall on the Russian market of steel by 10-12%. 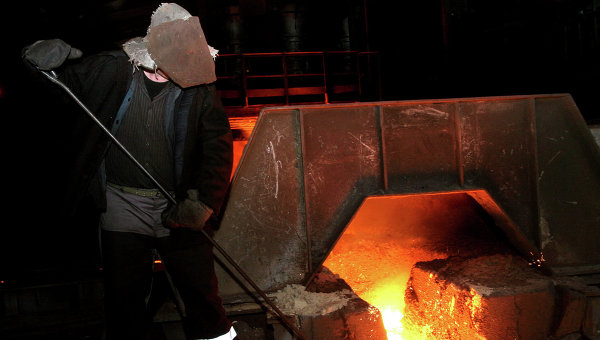 MOSCOW, 23 Dec. Despite the deterioration in operating and financial results during the economic crisis, steel companies have managed in the past 2015 to maintain profitability and even to be profitable. However, next year promises to be metallurgists for another test of strength.

At the beginning of the year the situation in the steel industry seemed, though difficult, but still in certain moments looked better compared to many other industries. Still, despite the crisis phenomena in world and domestic economy, steel production in the country in 2014 increased again, first by restoring the volume after the crisis of 2008-2009.

Ruble devaluation played into the hands of steelmakers, allowing them to win on the difference between the increased costs in rubles and foreign currency earnings from exports.

Soon, however, the positive factor was volatilized, and the negative trends on the increase, and in many ways became a turning point for the industry.

“In 2015, we fully felt all the crisis phenomena in the economy: falling prices for steel products, the decline in domestic demand and, consequently, heightened competition in key markets. It is now possible to state that continued weak demand will not allow Russian metallurgists to significantly increase the volume of production, as has happened in the last few years”, — said General Director of “Magnitogorsk metallurgical combine” (MMK) Pavel Shilyaev.

Pressure without a demand

The recession in the economy has affected almost all major steel consumers in Russia. Thus, according to Fitch Ratings, the consumption of long products declined by more than 10%, while passenger car sales compared with last year fell by almost a third.

Including, as noted in NLMK, for January-September 2015 the demand for steel for the construction industry decreased by 13.5%. Overall for the year, as reported by the head of corporate strategy at Severstal, Andrey Laptev, the expected decline of the Russian market of steel by 10-12%.

Additional pressure on prices at the same time provided the increased exports of cheap steel from China, whose manufacturers, according to Director of group strategy “Novolipetsk steel” (NLMK) Konstantin Arshakuni, for a variety assortment of selling their products much below cost.

“In the year exports from China amounted to 120 million tons – more than three years steel consumption in the Russian Federation. This volume the market can not digest, and world prices fell to multi-year lows (on average by 35% compared to last year depending on region and product),” said Arshakuni.

“The price of Russian steel fell to a 12-year low. This is due to the drop in demand in case of unavailability of Chinese steelmakers to reduce production, which in some extent is explained by the fact that the Chinese sector is subsidized by the government,” he explained.

Along the way, continued to fall in price and raw materials. According to NLMK, in January–September, the price of coking coal and iron ore has decreased in the past year by 24% and 20% respectively.

This, in turn, also had a negative impact on Russian companies, most of which are vertically integrated, bringing together the entire production chain from production to implementation. In conditions when the prices for raw materials tend to its cost, the benefits of owning their own raw materials becomes questionable.

As a result, in its financial statements for the first nine months of the year, steel companies recorded a decline in revenue by more than 20% (from 21% in NLMK to 25% in MMK). Coal and metallurgical Mechel lost 35% of revenue for the same period, but focusing mainly on the production of iron ore of metalloinvest — 31%.

Since the fourth quarter due to a seasonal decrease in business activity is traditionally weaker than the previous one, and improvements by the end of the year to expect does not have to.

Maneuvers on the decline

However, during this period almost all Russian companies have made a profit (except for “Mechel”), and some even were able to significantly increase. As a recipe for success basically called improving the efficiency and flexible sales policy.

The main support of domestic industry once again had a low rate of the ruble, allowing the background of the devaluation to further reduce costs and capital costs. Moreover, the main investment projects were, as a rule, completed before the crisis, and large new investments it is not necessary, especially against the background of the overcapacity.

However, Laptev noted a mixed effect of the devaluation of the ruble. “On the one hand, has reduced our costs in dollar terms, which is good for exports. In Severstal’s capex by 75% are denominated in rubles, expenses – 90%, so we are benefiting from the deterioration of the ruble. On the other — our Russian clients were in a difficult position,” he said.

The company, in his words, understands that for a long time to win at the expense of exchange rate differences will not succeed, and therefore reducing costs involved, increasing the proportion of products with high added value and increasing customer centricity.

“The most important conclusion of this year for us is that the company must always be on the extreme left of the cost curve because the market situation can change at any time, to forecast prices is almost impossible. If a company has low costs, it will be successful in any market situation,” — said Laptev.

In the company’s success believe their model, when the steel production is concentrated in low-cost markets, and the production of finished products is carried out in close proximity to the end consumer in such key markets as Russia, the EU and the US.

“The business model allows NLMK to quickly diversify sales as by product range, as well as regional implementation. If markets are growing, we demonstrate a record-high profit when markets are falling, we show just a high profit. It is our stability and confidence in the future of our shareholders,” he explains.

Thus, the peculiarities of their own business models that help to successfully survive in the challenging market conditions, has the right to speak, perhaps, any domestic steel company. For example, CMI uses in its activities, mainly the purchase of raw materials.

“MMK as the company is poorly integrated into commodity assets, will benefit from lower prices for iron ore. Now the cost of our slab is 196 dollars per ton, it is one of the best in the world, which gives additional stability of the company,” said Shilyaev, speaking about prospects for the next year.

With the new negative

The prospects of domestic industry in 2016 taking into account all macroeconomic forecasts looks like at least difficult.

“We do not expect economic recovery in 2016. Most likely, the domestic market capacity and demand for the range of CMI in the coming year will remain at the level of 2015. Continued pressure on prices will have fallen demand for products of the construction segment and the decrease in production in the automotive industry”, — says the head of “Magnitogorsk”.

Fitch continues to maintain a negative Outlook on the Russian steel sector in 2016 due to weak demand from end consumers of steel, such as construction segment, automotive, engineering and manufacturing of electrical equipment.

According to the Agency, the consumption of steel in Russia in 2016 will drop another 2%, although the drop in demand and slow compared to the current year (minus 5%).

“The decline in consumer purchasing power, business activity reduction of business Fitch expects the continuation of negative trends in the construction sector and expects a 5% drop in the consumption of rolled steel in 2016”, — said the Director of analytical group of Agency companies in the metals and mining sector in Europe, Middle East and Africa Ilya Makarov.

According to him, the General level of prices for steel products in the world, the expectations of the Agency, will continue to be under pressure because of large exports, mainly coming from China. This, in turn, will affect the export prices of Russian producers.

New risks due to increased competition in foreign markets is the emergence of new protective duties on imported steel introduced by many governments to protect their producers.

“Unprecedented protective measures covered all the important steel markets in the world. Half of Russia’s steel exports is at risk of protectionist measures. In the last year against Russian steel products initiated eight investigations in the USA, Canada, EU, Turkey, India and Malaysia,” said Arshakuni.

With the Director of strategy relies on solidarity and Makarov, on the view that there is a probability of intensification of anti-dumping measures taken by the European regulators to prevent cheap imports from China, Korea and Russia.

In hopes of a rebound

With all this domestic steelmakers and find a reason for cautious optimism, considering that the delay of falling of demand must inevitably follow its growth.

“Global prices for steel in 2015 fell by 34%, which is in the hands of consumers because they can save considerably on your expenses. This should encourage more extensive use of steel, and hence the increase in demand and some rebound from current price level in 2016,” says Laptev.

For the global market, in his view, much will depend on the particular situation in China, but “from there we hear more and more news about the shutdown of companies” and the internal is projected top-Manager of “Severstal”, the situation in 2016 will improve on the back of growth of GDP, and in 2017 and expected growth in steel consumption.

“In 2017, with high probability, there will be a reversal in consumption of steel, because fundamentally the economy are underinvested in housing and infrastructure construction, in the manufacture of pipes and engineering,” and believes the Arshakuni.

Is that Russian steelmakers have enough safety margin and the next difficult year, no doubt and Analytics.

“Despite the challenging pricing environment and a reduction in steel consumption in the country, Fitch believes that Russian companies are in General well prepared to resist negative trends in 2016. The profitability of Russian companies, partially supported by the ruble’s weakness, will remain one of the highest in the world. The total debt burden of Russian companies remains at a moderate level,” — says Makarov.