Washington, and a number of forces in Europe believe that Ukraine should be turned into a strategic counterbalance to Russia, said the head of the Duma Committee on international Affairs. He noted that the Ukrainian crisis was used in order to increase the potential for anti-Russian NATO. 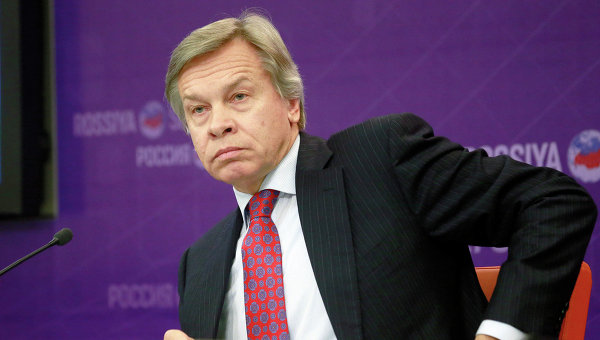 MOSCOW, 24 Dec. The head of the Duma Committee on international Affairs Alexei Pushkov believes that the United States and Europe took advantage of the crisis in Ukraine to boost anti-Russian potential of the European Union; and to place a missile defense system in Eastern Europe.

“In the U.S. and some in Europe believe that Ukraine should be turned into a strategic counterbalance to Russia. And they have used the Ukrainian crisis to ramp up anti-Russian potential of NATO, to agree about creation of bases in Poland, rapid response, accelerated placement of advanced missile defense systems on the territory of several countries of Eastern Europe. NATO builds its strategy on the myth of “Russian threat”,” — said Pushkov in an interview to “Rossiyskaya Gazeta”.

But in fact no threat to Europe from Russia is not coming, he added.

“True, not a fictional threat to her comes from the Middle East — from DAYS. And the EU is beginning to understand”, — said Pushkov.

Relations between Russia and NATO have deteriorated in 2014 because of disagreements on Ukraine, the Alliance unilaterally announced the termination of military cooperation with Russia.