MOSCOW, December 24. The President of Russia Vladimir Putin noted the similarity of positions of Moscow and new Delhi on the most pressing international issues. 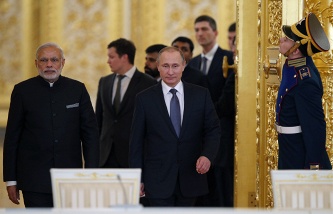 “It is important that the approaches of Russia and India to major international problems coincide: our countries advocate a political solution to the conflict in Syria, for facilitating the process of national reconciliation in Afghanistan”, – told reporters the Russian leader after negotiations with the Prime Minister of India Narendra modi.

“We are convinced that in the interests of the entire international community – the formation of a broad antiterrorist coalition operating on the basis of international law and under UN auspices”, – said Putin.

The President noted that “Russia stands for further strengthening of India’s role in solving global and regional problems”. “We believe that India is a great power conducting a balanced and responsible foreign policy, is one of the most worthy candidates for permanent membership of the UN security Council,” – said the Russian leader. He reminded that Moscow has “actively supported the accession of India to the Shanghai cooperation organization”, the two countries cooperate closely in the BRICS (Brazil, Russia, India, China, South Africa), the presidency of which in February 2016 will go to India.

About the plans of NPP construction

Putin also told about the nearest plans of the Russian Federation in India to build several nuclear reactors.

“With the assistance of Russia is being built NPP “Kudankulam”, the first unit of the plant was commissioned in June 2014, a few weeks remain until the launch of the second unit,” said the Russian head of state.

According to Putin, the Russian experts “intend to begin construction of the third and fourth units, as well as the negotiations on the fifth and sixth units” NPP “Kudankulam”.

According to the Russian leader, all of these plans in the nuclear energy industry – summary of the implementation a year ago, signed the document on strategic cooperation in the nuclear field. “It sets forth the plans for joint construction in India at least an additional six units for twenty years”, – reminded the President of the Russian Federation.

The Russian President regretted that “in the January-October 2015 the trade turnover has decreased by 14.4 per cent.” “This is due mainly to the decline in energy prices and demand for engineering products, the difficult external environment and foreign exchange differences”, – said the head of the Russian state. He said that the leaders agreed “to intensify efforts to bring the trade on a sustainable growth path”.

According to Putin, “a significant reserve is to expand investment cooperation”. “We agreed to increase mutual investment flows at the expense of deepening industrial cooperation, implementation of major infrastructure and energy projects,” the President said.