The diversity of the product line in local stores, was not injured as a result of the ban of imports on the shelves has increased the number of products of Russian agriculture. Although some products to replace the failed, for example, cheeses with noble mould. 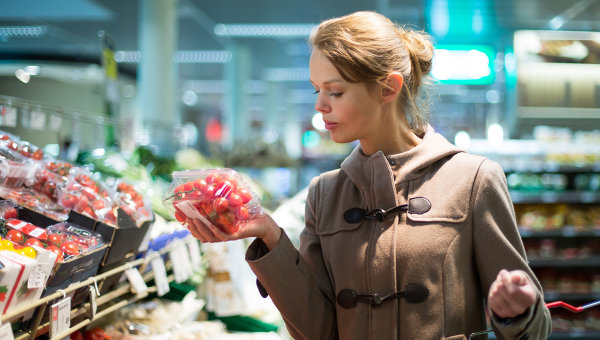 MOSCOW, 24 Dec. The shelves of Russian stores in the past year differed little on a range of products from option the end of 2014, when a response of the Russian embargo on EU sanctions banned the import of certain agricultural products. A novelty for the Russians this year was the complete lack of dairy foods “forbidden” countries, including cheeses, they used to get on the table under the guise of “lactose-free”.

Since the ban on import “sanctions” did not bring the desired results in full, the government took the hard decision to destroy all the prohibited products that are trying to smuggle across the border. The move provoked a broad discussion in society and even became the reason for the collection of signatures for cancellation of the decision.

Russian agro-industrial complex, received the opportunity to increase its presence in the stores, began to increase production, the government has allocated additional funding assistance for interest on loans.

The retailers themselves set before the fact of prohibition of import from certain countries, changed some suppliers on others and declare that the diversity of the product line is not affected, although some products, such as cheeses with noble mould, replace failed.

You remember how it all began

Russia at the end of June this year took the decision to extend, in effect since 7 August 2014, the food embargo by modifying the original version.

The updated list of agricultural products, raw materials and food, which cannot be imported into the Russian Federation up to August 5, 2016, has remained fresh, chilled or frozen beef, veal, pork, poultry meat, and also salted, in brine, dried or smoked meat and sausage.

Also, Russia has narrowed the list down to all milk and dairy products, but again included these paragraphs lactose-free products and banning the delivery of any products and cheeses, “made by the technology of cheese production and contains 1.5% or more milk fat”. In addition, in Russia for another year will not ship live fish, except for fry of Atlantic salmon and trout, and crustaceans, molluscs and other invertebrates with the exception of juvenile oysters and mussels.

With the new year to the list of countries from which prohibited imports of products added to Turkey and Ukraine. And the Ministry of agriculture of the Russian Federation and sellers in chorus declare that the share of these countries in the food supply is so small that we can replace them with any other not working.

The replacement of European and American goods for the Russian retail market took place, according to the sellers, without much difficulty, almost all of them stated that many of the items they find products from domestic producers.

“The proportion of products banned in retail chains X5 was less than 10%, we quickly were able to substitute goods from other countries that are not targeted by the sanctions, virtually all positions,” — said the press service of X5 Retail Group.

Agree with colleagues and representatives of the company “Dixie”, which includes the eponymous stores as well as “Victoria” and “Megamart”.

“With the introduction of special economic measures under the food embargo in the three divisions of the group of companies “Dixie” got over a thousand SKUs, to date, the substitution is fully and successfully implemented, the share of Russian products in various categories have been increased by 10 per cent,” the company said, adding that, “few positions in the dairy group (for example, cheeses with noble mould) replace failed and some familiar to buyers of apples, pears, peaches and tomatoes replaced by alternative”.

The representative of the network of hypermarkets “Globus” Mary Zinin said that, “speaking about the replacement and new countries of supply, we note that we have significantly increased the share of goods (in the category “vegetables/fruits”) from China and India, there were cheeses from South America”.

“But, unfortunately, on the part of some of the products of substitution has not occurred. These include authentic cheeses, partly berries, meat products from Spain and Italy — all this is a unique proposal,” she added.

Reality as an opportunity

Russian manufacturers and suppliers of food their joy from the situation, do not hide, while talking about a number of problems.

“Food “embargo” became an incentive for Russian producers to expand production capacity, domestic production has increased in several categories of products — pork, chicken, cured meats, cheeses, certain types of fish, vegetable canned food”, — said the Deputy Chairman of the Board of the Association of producers and suppliers of food products “Rusprodsoyuz” Dmitry Leonov. He said that “part of output growth attributable to previously made investments in these areas”.

According to him, in terms of import substitution a significant breakthrough occurred in the food category salt. “By the end of the year the share of imports in this sector fell by almost a half,” — said Leonov. However, he notes that all is not so rosy and safely in the field of replacement volumes.

“A year after the introduction of the measures, we cannot say that we were able on their own to replace the fallen volumes of products, there are a number of reasons. First, the duration of production cycles and long payback investment projects in certain categories of products. Secondly, reduction of solvent demand of the population. Thirdly, the increase in costs for the purchase of imported raw materials and equipment due to the devaluation of the rouble, the increase in interest rates on loans,” — said Leonov.

Further development of the agricultural sector in Russia, including depends on whether the Russian Federation will prolong the embargo, will continue to support domestic producers. While representatives of the market accurate in their forecasts for the coming year.

“The year 2015 has shown that the imposition of an embargo greatly contributed to the growth of local production in most industries affected by the import ban, many vendors have already implemented or started to work towards the implementation of internationally certified quality management systems (QMS)”, — said the head of Department of purchases of products with a short shelf life trade network Selgros Cash&Carry Andriy Ignatov.

According to him, many Russian manufacturers took advantage of the current situation, stabilized the business and intend to continue to strengthen its position in the market — both from the point of view of the competitive abilities of the range and expansion of distribution.

At the same time representative of a network of hypermarkets “Globus” Mary believes, namely that “at the moment it is difficult to predict the decisions on sanctions and their abolition”.

“In the negotiations with producers (milk, cheese, vegetables, fruits, poultry in stock) information flows, significantly increase investments in production, with growth of at least 50% of the previous 2014 year, while limiting the flow of imported goods. According to producers, this will provide sales to the Russian manufacturer in the domestic market for the subsequent increase of investment in production,” — said Zinin.

The representative of “Rusprodsoyuz” Dmitry Leonov believes that “if business is to understand that the ban is not temporary short-term measure, and not to limit the planning horizon to a certain period, it will be an additional incentive to invest in agriculture and, accordingly, growth of domestic production”.

A view from the outside

“Trends in growth in the share of domestic products in some key markets (pork, poultry meat, butter and cheese) were laid well before the embargo — since the beginning of 2013, and there are no fundamental reasons for sharp changes in these trends there,” said Razumova.

According to her, in the meat market will increase the production of pork, poultry and, in General, for these products we expect significant export growth.

“The segment of cattle, on the contrary, will be reduced in the industrial sector and in private households, although major players such as Miratorg will continue to strengthen its positions on this market”, — says the analyst.

She notes that the production of cheese, butter will continue to increase, but more modest pace than in 2014.

“Manufacturers will continue to reduce the production of milk powder, as global prices are low and easier to purchase it on foreign markets, and the freed-up resources to use on higher margin products,” says Razumov.

In the segments of fish, fruit and vegetables is not going to happen.

To destroy can’t be helped

Despite the fact that the import of products from the list of “sanction” countries was banned, enterprising citizens and organizations still find ways to “sneak” across the border and fruits and vegetables, and cheeses. For example, in the documents of the cargo has been written that he follows in Kazakhstan, or Armenia, with which Russia has a common customs space. But often, getting on the territory of the Russian Federation, the truck with the “sanctional” were simply dissolved in the vastness of the country. The Rosselkhoznadzor regularly reported about detection in different regions of the “Belarusian” fish and other products.

To improve the effectiveness of the ban on the importation of products from countries in the list of predamage the Russian President Vladimir Putin in late July signed a decree about the destruction of such products is from 6 August. Then the government approved rules to allow this to destroy food by any method provided for by law, taking into account environmental standards. This measure has caused a broad discussion. A petition against the destruction products on the Internet signed by more than half a million people.

At the end of October of this year, the CPS and the Rosselkhoznadzor with the participation of the Federal customs service (FCS) of the Russian Federation has destroyed 404,8 tons of “sanctions” products for the period from September 2014 to September 2015. During the period also were seized 109,7 tons of goods returned 777 tons of goods in Kazakhstan, Belarus and other States, filed 236 cases of administrative violations, imposed fines in the amount of 4.1 million rubles.