MOSCOW, December 24. Resource base of oil in the Russian Federation allows for decades to maintain production at the level 515-520 million tons per year.

This was announced at a press conference in Minister of natural resources and ecology Sergey Donskoy. 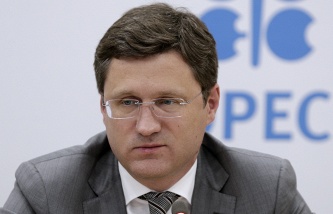 Novak: oil production on the shelf of the Russian Federation has grown in 2015 by 16%, to 18.8 million tons

“The existing raw material base of oil and condensate and the pace of its development allows you to confidently predict in the next decade a stable annual production levels in the range of 515-525 mln tons. To predict the price of oil is quite difficult, but today the price effect and impact on the volume of exploration works”, – said the Minister.

“Based on the available exploration methods, according to our estimates, oil will be enough for 30-40 years. This, again, based on today’s conditions on the funding. But we must also consider that so far does not take into account the reserves of unconventional oil, they have a significant amount,” added the Minister.

According to him, the increase in recoverable oil reserves in Russian Federation in 2015 will amount to 710 million tons, gas – 900 billion cubic meters. “The increase in recoverable reserves of category C1 will be about 710 million tons, gas – 900 billion cubic meters of budget Revenues from payments in the sphere of subsoil use will be about 40 billion rubles. the Plan was 37 billion rubles, that is the plan we have fulfilled,” – said the Minister.

In 2016, the Ministry plans to auction 27 oil and gas sites. “We plan next year to expose on the auctions and competitions 27 hydrocarbon subsoil plots, including 14 of January will be an auction at the Swan Deposit in the Khanty-Mansiysk Autonomous district (the C1 reserves amount to about 7 million tons, C2 – more than 30 million tons), also in March we plan to auction the Deposit in the Tyumen region (C1-C3 – about 30 million tonnes),” he said.

Don also noted that the Ministry of environment in 2015 actualized 65 licenses of “Gazprom” and 289 licenses to Rosneft.

While Donskoi said that the Ministry of environment does not expect growth in exploration in 2016, may decrease. “While positive trends in exploration there,” he said. According to him, the company now focus on the current drilling and production. “We’re looking for mechanisms to increase the investment attractiveness of exploration, but, most likely, will decrease” – said Donskoy.