TASS KIT. On December 23 the state Duma of the sixth convocation has held the last plenary session of autumn session 2015. After this, the deputies will continue to work with voters in their districts, officially the session will conclude on December 31.

Meetings and other work of parliamentarians

The autumn session of the state Duma began on 24 August 2015 15 September to 23 December there were 26 plenary meetings – almost twice less, than during the spring session, when MPs was about 48 times. The only meeting in the “extended composition” was held on December 18. The meeting was attended by representatives of 29 non-parliamentary parties. A number of them (“Apple”, “Patriots of Russia” “Communists of Russia”, “Motherland”, Civic platform, etc.) directly participated in the discussion in the first reading the draft law on increasing the retirement age for state and municipal employees. 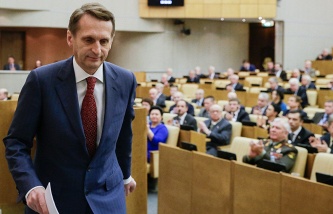 The state Duma has completed the autumn session

In addition to the plenary meetings, the deputies intend to “government hours”, during which representatives of Federal agencies report on their work. Since September was held 8 such meetings, including closed to the press report of the head EMERCOM of Russia Sergey Shoigu on December 16.

Twice in the second half of 2015, the state Duma gathered for a joint event with the members of the Federation Council. The first was held on 20 November in the hall of columns and was dedicated to the fight against terrorism. The second time, December 4, representatives of both chambers have heard the message of the President of the Russian Federation Vladimir Putin to the Federal Assembly.

As of December 24, 2015, in the lower house of Parliament was made 589 bills (including 5 constitutional). In the spring session for consideration Council has received 961 document (including 19 of the constitutional bills).

The most active in the drafting of laws were state Duma deputies and Federation Council members, which was submitted to Parliament 319 documents (440 in the spring session). The largest number was made by Sergey Mironov (“Fair Russia”) – 33, Rinat khayrov (“United Russia”) – 25, Magomed Gadzhiev (United Russia) is 24.

At the meetings of the state Duma was considered the bill 531, among them – 9 of the Federal constitutional (including those that were made before the start of autumn session 2015). This is 1.3 times less than in the spring session (711 bills, including 9 constitutional).

In the first reading adopted 99 documents (spring – 107), the second one (4). In the final (third) reading of the deputies approved 202 of law – 1.4 times less than in the previous session (278). One of the adopted documents was returned from the Federation Council for re-consideration to the state Duma (amendments to the code of Criminal procedure, to declare the testimony of witnesses and victims in court).

Other bills discussed 246 were dismissed, 6 withdrawn by its authors (319 and 5 respectively in the spring session). Seven returned to the first or second reading, or their consideration postponed to a later date.

The President signed 111 bills adopted by the Parliament in the second half of 2015, including 2 of the Federal Constitution (on the government and on the constitutional court of the Russian Federation). The results of the spring session, the head of state signed 277 of the laws, including constitutional 5.

– The amendments to the legislation, according to which day of the Duma elections in 2016 postponed from December on the third Sunday of September and combined with a single day of voting.

– The CEC approved the proposed scheme of cutting single-mandate districts for parliamentary elections and the new rules of replacement seats.

– Adopted a bill on early deprivation of powers of deputies of all levels, not granted in time the income statement.

– Approved the appointment of Deputy heads of Federal services and agencies by the government, not by Ministers, as it was previously.

– The constitutional court had the opportunity not to accept international judicial decisions, if they contradict the Russian Constitution.

– Adopted a bill on suspending indexation of pensions for working pensioners.

– Limited the right of foreign States to dispose of their property located on the territory of Russia.

– Approved ban on the recognition of extremist texts of Holy Scripture and introduced control over the activities of religious organizations financed from abroad.

– Citizens are allowed to have a second passport.

– Passed a bill that extends the powers of the FSB to use weapons.

– Suspended the Treaty on free trade zone with Ukraine as of 1 January 2016.

Changes in the composition of the Deputy corps

During the autumn session of the 11 deputies ahead of schedule resigned, from them 5 persons – members of the faction “United Russia”, 3 – the Communist party, 2 – “Fair Russia” and one MP from the liberal democratic party.

Basically, the increase in the number who left the Duma deputies during the autumn session, associated with their transition to the Federation Council after the results of the single voting day September 13th 2015 the Parliamentary mandate in the Senate was replaced by Elena Mizulina, Nikolay Bulaev, Frants Klintsevich, Sergei Kalashnikov, Yury Volkov, Rostislav Goldstein, Vyacheslav Markhayev.

In addition, on 16 October 2015, the state Duma gave its consent to the Prosecutor General of the Russian Federation on arrest of the Deputy Ilya Ponomaryov (a just Russia), who is accused of complicity in the embezzlement of funds of the Fund “SKOLKOVO”. April 7, 2015 he was removed parliamentary immunity and on July 17 made the decision on correspondence arrest. His parliamentary status Ponomarev retained. At present he is abroad.

Compared to the spring session of the Duma left have more than doubled: in the period from January to August only 5 MPs ceased the powers prematurely. One of them is a Communist Konstantin Shirshov – lost his mandate in summer session is not according to his own statement, and the decision of the state Duma. April 15, 2015 concerning the Deputy came into force the sentence of the Moscow city court issued on may 26, 2014 Shirshov was found guilty of fraud for attempting to sell a parliamentary mandate and sentenced to 5 years imprisonment.

In the period of autumn session 2015 under new management three Duma committees. In October, the Committee on rules and organization of work of the Duma is Sergey Popov was headed by Viktor Pinsky. The chairmen of the committees on health and on family, women and children is passed to the Federation Council Sergey Kalashnikov and Yelena Mizulina appointed Sergei Furgal and Olga Epifanova.

The spring session of the state Duma in 2016 will begin January 11 and end on August 6. Scheduled for January 19th, the inaugural plenary session.

September 18, 2016 in a single day of voting elections of the new composition of the State Duma. Since the beginning of its work the sixth convocation will cease operations. Thus, his term will be reduced almost three months.