MOSCOW, December 25. Ministry of development is exploring the possibility of creating four areas of advanced development (TOR) in the far East in addition to the existing 12. This was announced by the Minister for Far East development Alexander Galushka at the meeting of the Federation Council in the framework of the “parliamentary hour”. 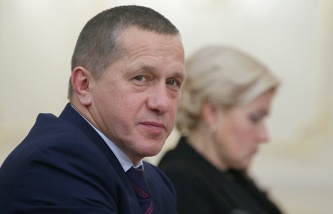 Trutnev: private investors put more than 10 rubles to the budget of the ruble in the far East

“For these specific firm bids are new businesses in the far East, new jobs. Each TOR is a new industry in the wider region,” he said.

On the eve of the government Subcommission on the issues of implementation of investment projects in the far East, approved the creation of three new THOR – “the White stone” in Primorye and the first two on Sakhalin – “southern” and “Mountain air”.

“2015 was the year of formation and practical start of the main mechanisms advanced development of the Far East: first, the TOR network, secondly, a Free port of Vladivostok, thirdly, the public infrastructure of support of investment projects, fourth, the development Fund of the Far East, finally, prioritize a variety of government programs,” – said Galushka.

“Rosneft”, “Gazprom” and “SIBUR” will implement their projects in the fields of oil, gas refining in the far East in the framework of territories of advanced development (TOR), also reported to journalists by the head Minvostokrazvitiya Alexander Galushka.

“In December, there was a “road map” government Directive on the implementation of the strategic investment project – establishing the Eastern petrochemical plant in Primorye. It implements the company “Rosneft”. In order established that the Ministry will submit to the government proposals for the establishment of the torus under this project,” he said.

According to him, the Ministry is also working with Rosneft. The company expressed its interest, noted that the Economics of the project acquires the necessary level of profitability if there are strong stimulating modes in a TORUS. “Here we have a direct order of the government of the Russian Federation”, – said Galushka.

Also within the TOR “Svobodny”, the formation of which is currently under elaboration, will be sold gas processing and petrochemical projects “Gazprom” and “SIBUR” in the Amur region.

“Total investment, which was announced today these two companies is approaching 1.3 trillion rubles. This is a great investment for any country, for any economy. Calculations show that together, these two projects will add 0,5% to the GDP of the Russian Federation”, – said the Minister.
Ministry will present proposals for the creation of the Torah under these projects. “We are now working on these proposals, are in close dialogue and cooperation with the companies “Gazprom” and “SIBUR”. We hope that next year the appropriate TOR will be established,” – said Galushka.

Alexander Galushka also said that the outgoing year of 2015 has brought the Far East 988,51 billion rubles of investments.

“New mechanisms of development of macroregion give 988,51 billion rubles of investments in the economy (2015 – approx.). Of these, 74.8 billion – budgetary funds and 913,7 billion – private. Thus, the ratio of budgetary and private sources of funding is 1 to 12,” he said.

Thanks to this far Eastern regions will be created 48,4 thousands of new jobs. “New Eastern policy of the Russian state finds support in Russian society. The most important word – “hope”. It is associated with the measures of state policy, which is implemented in the far East,” Galushka said.

According to him, four of the far Eastern region are leaders for socio-economic development in Russia – Yakutia, Magadan region, Sakhalin region, Jewish Autonomous region. They received 18.5 percent of the total grants, the Minister said.

Galushka also stressed that the overall socio-economic situation in the far East demonstrates good results. Thus, the growth of industrial production for the first 9 months of 2015 amounted to 3.1% (Russia – decrease at 3.2%). The growth of investment in fixed capital amounted to 4.9% (Russia – decrease of 5.8%). Also increased income taxes, and 31.1% average monthly salary by 5.7% (in Russia – an increase of 3.7%). Recorded the natural increase of the population – 5647 people.

Ministry of the Russian Federation in 2015 will complete the state program, 98% said Galushka.